The overall goal of cancer screening is to reduce suffering from cancer and save lives by identifying precancer or cancer before it causes symptoms. For example, colorectal cancer screening substantially reduces the risk of developing and dying from colorectal cancer and screening mammography can reduce deaths from breast cancer. Although these screening tests and other methods successfully detect precancers and early cancers in people without symptoms, the tests are limited to only a few common cancer types. For many cancers, there are no effective screening tools. Symptoms of deadly late-stage disease for these unscreened cancers may be the first sign that something is wrong.

Asymptomatic multi-cancer detection (MCD) tests have the potential to substantially change this narrative. Using a single blood draw, these tests may be able to detect the presence of multiple cancer types—including ones without established screening methods.

What Is Multi-Cancer Detection?

Multi-cancer detection (MCD) tests pick up signals in blood and other body fluids that may suggest the presence of cancer. They are the latest versions of a technique known as liquid biopsy. Such approaches seek out cancer clues, such as circulating tumor cells, tumor DNA, and other tumor materials that cancer cells release into the body. MCD tests can process these signals and predict the presence of different types of cancers.

This promising new technology has the potential to transform how we think about and implement cancer screening. However, many questions about the benefits and harms of using MCD tests for cancer screening remain unanswered. It is unknown whether MCD tests will reduce deaths from cancer, lead to unnecessary diagnostic procedures that may cause undue harms, or change the use of standard, effective screening tests. Additionally, we don’t know if all populations will benefit equally from this technology. 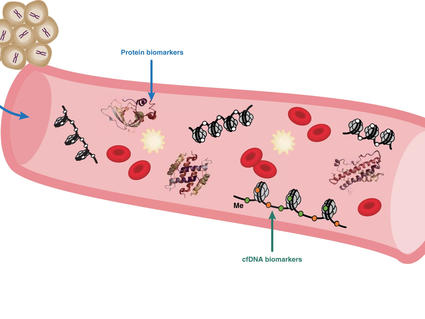 Screening for Many Cancers with One Test

Many multi-cancer early detection tests are in the works, but more research is needed.

To answer such questions, we need to conduct rigorous clinical trials to determine whether using MCD tests to screen asymptomatic people will reduce cancer deaths without causing substantial harms, such as suffering and long-term anxiety from inconclusive or negative diagnostic investigations triggered by a positive result on a MCD test.

NCI is supporting the creation of a new clinical trials network tailor-made to evaluate these and other emerging screening technologies. Investments in assay research and development will also fuel discoveries that may enhance existing MCD tests and catalyze the generation of new methods.

Although it may seem counterintuitive, detecting asymptomatic cancer does not necessarily save lives. For example, chest x-rays can detect some lung cancers before they become symptomatic, but rigorous clinical trials did not show that identifying lung cancers with chest x-rays prevented death. By contrast, screening with low-dose computed tomography can reduce deaths from lung cancer.

Current MCD tests are better at detecting later-stage cancers than early-stage disease. Therefore, it is critical to determine whether these tests will reduce mortality compared with not using such tests.

A new Cancer Screening Research Network (CSRN) will build upon the clinical trials infrastructure that is already in place with these established networks. CSRN will focus on fostering relationships with primary care physicians, gynecologists, gastroenterologists, and other clinicians, as well as health outcomes researchers and population scientists. Such health care providers have expertise in screening people without symptomatic cancer. This screening network will establish study sites across the United States and enable diverse and representative populations to participate in cancer screening studies.

One of the first areas of investigation for this network will be to study whether these promising MCD tests, when used for cancer screening, will prevent cancer deaths and for whom. Answering this question is an urgent matter: Some of these tests are already available to the public, although none have been proven to reduce mortality.

NCI is already contributing to efforts to determine the broader impact of MCD tests on public health. Researchers at the Fred Hutchinson Cancer Research Center, the University of Washington, and NCI developed a framework for calculating the benefit-versus-harm profile of an MCD test. Their analysis points to the number and type of cancers to include in multi-cancer screening, criteria that can lead to more lives saved while limiting harms.

Research is needed to assess the impact of multi-cancer detection tests, including

This effort to study the impact of MCDs extends across NCI—and beyond. There are ongoing discussions with federal partners, such as the Food and Drug Administration, the Centers for Medicare and Medicaid Services, the Department of Veterans Affairs, and the Department of Defense. NCI is also actively engaging with a variety of interested parties outside the government. The institute issued a request for information specifically seeking information from companies to learn more about technologies in development and to gauge interest in a clinical trial. Conversations with respondents are ongoing. NCI is also planning to conduct focus groups to understand public perception of the benefits and risks of using MCD tests for cancer screening.

NCI has played a foundational role in developing MCD tests through investments in cancer biology as well as technology development. These investments enabled a first-of-its-kind study, led by Johns Hopkins University researchers, that successfully combined imaging with a multi-cancer blood test called CancerSEEK to detect tumors in participants with no symptoms or history of cancer. The test is now under further development with a cancer biotechnology company.

NCI continues to play a driving role in advancing liquid biopsy technology through the NCI-supported Liquid Biopsy Consortium. Multidisciplinary teams across the country are working on blood-based liquid biopsy tools for the detection of asymptomatic breast, ovarian, and lung cancer, as well as exploring detection of asymptomatic cancers using cerebral spinal fluid, saliva, and stool.

In addition to these investments in technology research, NCI-supported studies of basic cancer biology serve as a starting point to identify measurable features for early cancer detection. For example, NCI-funded researchers found that a fragmented pattern of cell-free DNA in the blood is common in patients with cancer. By combining cell-free DNA fragmentation and mutation analysis with artificial intelligence machine learning, the researchers accurately detected 91% of cancer cases in their study, which included breast, colorectal, lung, ovarian, pancreatic, gastric, and bile duct cancers. It remains to be determined whether this approach will prove useful in identifying and benefiting patients not known to have cancer.

These are just a few examples from a large portfolio of NCI-supported research in cancer biology that spans decades. NCI will continue to spearhead exploration into the differences between healthy cells and cancer cells to translate that knowledge into novel screening technologies and ways to intercept cancers before they become lethal. Discoveries will accelerate the development and refinement of MCD tests. The new CSRN will also provide an infrastructure for evaluating these emerging approaches in diverse populations.

As NCI makes these foundational investments in MCD and other screening technologies, we’ll learn more about how to screen for cancers to save lives. By rigorously evaluating MCD tests and ensuring that the benefits outweigh potential risks, we may be able to take important steps toward ending cancer as we know it today.