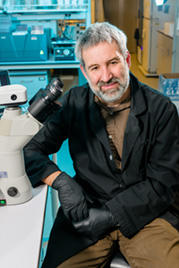 Mr. Potter is the primary tissue culture technician for the Nanotechnology Characterization Laboratory (NCL), maintaining human and animal primary and immortalized cells. His duties include running a variety of cell-based toxicity and immunology assays and working closely with other NCL personnel in assay development.

Mr. Potter began working at NCI at Frederick in 1989 in the Laboratory Animal Sciences Program. In early 1990, he transferred to the In Vitro Cell Line Screening Program of the Screening Technology Branch. There, he developed extensive cell culture experience as a technician in the 60 cell line human tumor panel, the AIDS-related lymphoma screen and the cellular differentiation screen. He was later assigned to the Molecular Target Screening Program, where he helped develop and run a variety of molecular target screens, including the B/ZIP and nucleocapsid screens. The wide range of experiences and responsibilities in his assignments in the Screen Technology Branch has given Mr. Potter valuable skills in cell culture and assay development.