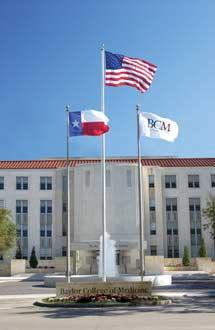 The Duncan Cancer Center is a world leader in the genomics and proteomics of cancer and pioneered the science that led to optimal hormonal therapies and other targeted therapies, as well as the immunotherapeutic treatment of cancer using CAR T cells. Investigators explore the interactions between the environment and genetics that lead to cancer, and through this science, they identify new targets for the development of novel drugs and biomarkers. The Duncan Cancer Center has enrolled more than 5,400 patients into clinical trials since 2007. Investigators are saving lives and improving care through innovative studies in adoptive T-cell immunotherapy, precision medicine, and de-escalation of treatment of breast and other cancers. Research programs include:  Breast Cancer; Cell and Gene Therapy; Pediatric Cancer; Nuclear Receptor; Transcription and Chromatin Biology; Mechanisms in Cancer Evolution; Cell Signaling and Metabolism; and Cancer Prevention and Population Sciences. The center is home to three Specialized Programs of Research Excellence (SPOREs) grants from NCI in breast cancer, lymphoma, and a shared SPORE with the University of Texas MD Anderson Cancer Center on glioma.

In a collaborative pilot with the Cancer Prevention and Population Sciences Program, the Mechanisms in Cancer Evolution Program, the Center for Precision Environmental Health, and the Oregon Health and Science University, the Duncan Cancer Center responded within a few days of the Hurricane Harvey catastrophe to provide funding to purchase silicone wrist bands to be worn by flood victims. The wristbands passively measured exposures to the 1,500 toxic chemicals, carcinogens, and endocrine disruptors that could have immediate and long-term effects on health, including cancer.

The center is also focused on initiatives that will likely alter medical practice. One project resulted from a collaboration in the Center for Cell and Gene Therapy program between basic scientists and clinicians. Patients posttransplant are at high risk for several potentially lethal viral infections. This group employed multivirus-specific T cells posttransplant and achieved a 92% response rate. In another project with implications for clinical treatment, the Breast Cancer Program showed that many patients with human epidermal growth factor 2 (HER2)–positive breast cancer may not need chemotherapy but can be treated with targeted therapy alone. Biomarkers to select the best patients for this strategy are now under development.