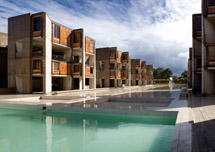 The Cancer Center at the Salk Institute for Biological Studies was established in 1970 and received its NCI designation in 1973. Today, the Cancer Center includes 29 faculty members, 184 postdoctoral researchers, 27 staff researchers and 27 graduate students. It accounts for about half of the Institute’s research.

Research at the Center is aimed at understanding fundamental aspects of biology related to cancer with the ultimate goal of reducing cancer incidence, morbidity, and mortality. The work of the Center is based on the philosophy that basic research in molecular, cellular, and developmental biology has the power to illuminate underlying causes of cancer, often in unexpected ways.

The Mouse Models and Cancer Stem Program pursues three avenues of research. The first looks at aspects of stem cell function, including self renewal and differentiation, growth factor requirements and microRNAs with the goal of learning more about tissue and cancer stem cells. The second path of research concerns developmental signaling pathways that are often reactivated and used to drive the cancer cell phenotype. A third theme of this program is the use of mouse models to study cancer biology and the role of inflammation. This part of the program also works on the improvement of lentivirus vectors for cancer therapy and for the development of new cancer models.

The Growth Control and Genomic Stability program’s research is based on the increasing recognition that genomic instability and epigenomic changes are a key to cancer progression. Several researchers in this program are pursuing different aspects of the ways that cells respond to DNA damage and maintain genomic integrity.

In addition to research, the Center has an active program of graduate and postdoctoral education and training. The Salk Institute and the Division of Biology at the University of California at San Diego (UCSD) conduct a joint graduate program. In March 2013 the Salk Institute Cancer Center joined the UCSD Moores and the Sanford Burnham NCI-designated cancer centers in forming the San Diego NCI Cancer Centers Council (C3).  C3 was created to leverage the distinct resources and talents of the three centers, and to build a new structure and process that would increase interaction and collaboration between cancer center faculties, leading to a deeper understanding of cancer and, ultimately, development of new and better treatments.  Thus, the C3 alliance provides unique opportunities in collaborative and translational cancer research afforded by the close proximity of the 3 NCI designated centers.

* This cancer center is one of seven cancer centers that only conduct laboratory research and do not provide patient care.
* This profile was provided by the Salk Institute Cancer Center.