What is a common mole?

A common mole is a growth on the skin that develops when pigment cells (melanocytes) grow in clusters. Most adults have between 10 and 40 common moles. These growths are usually found above the waist on areas exposed to the sun. They are seldom found on the scalp, breast, or buttocks.

Although common moles may be present at birth, they usually appear later in childhood. Most people continue to develop new moles until about age 40. In older people, common moles tend to fade away.

Another name for a mole is a nevus. The plural is nevi.

A common mole is usually smaller than about 5 millimeters wide (about 1/4 inch, the width of a pencil eraser). It is round or oval, has a smooth surface with a distinct edge, and is often dome-shaped. A common mole usually has an even color of pink, tan, or brown. People who have dark skin or hair tend to have darker moles than people with fair skin or blonde hair. Several photos of common moles are shown here, and What Does a Mole Look Like? has more examples. 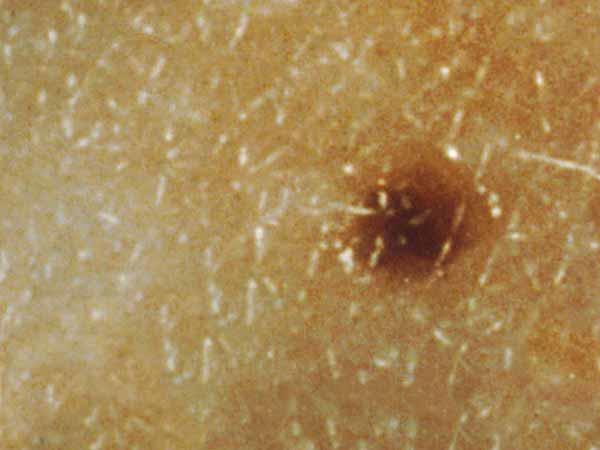 This common mole is 1 millimeter in diameter (the width of the tip of a sharpened pencil).

This common mole is 2 millimeters in diameter (the width of the tip of a new crayon). 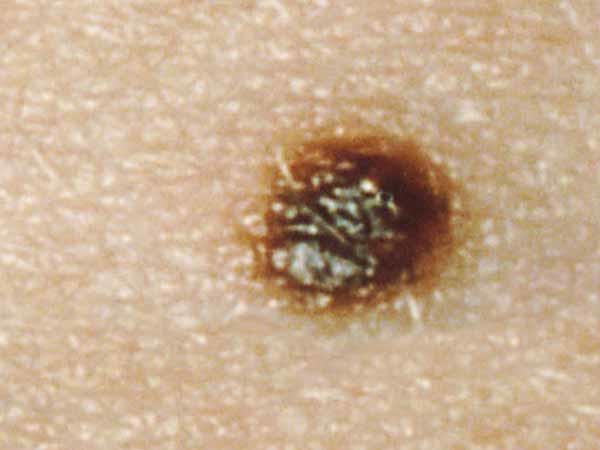 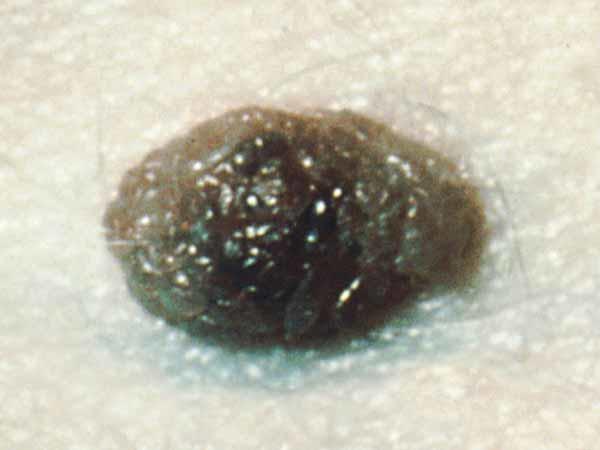 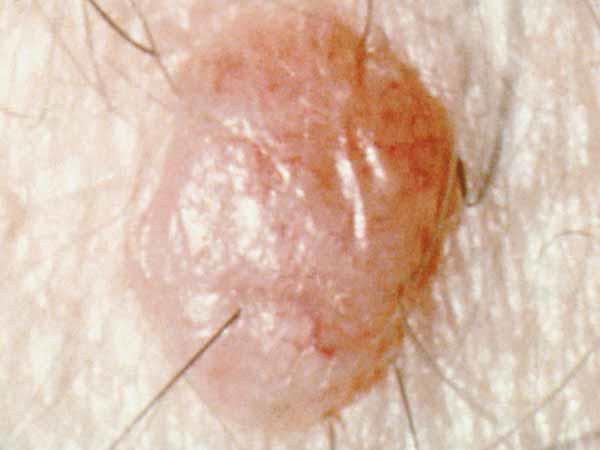 Can a common mole turn into melanoma?

Only rarely does a common mole turn into melanoma, the most serious type of skin cancer.

Although common moles are not cancerous, people who have many small moles or several large ones have an increased risk of developing melanoma (1).

Certain changes in a mole may indicate that it is turning into a melanoma (2). People should tell their doctor if they notice

What is a dysplastic nevus?

This dysplastic nevus has a raised area at the center that doctors may call a “fried egg” appearance. 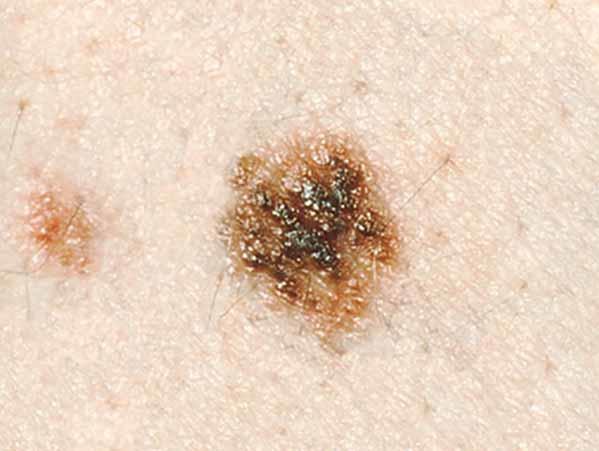 This dysplastic nevus is more than 5 millimeters in diameter. 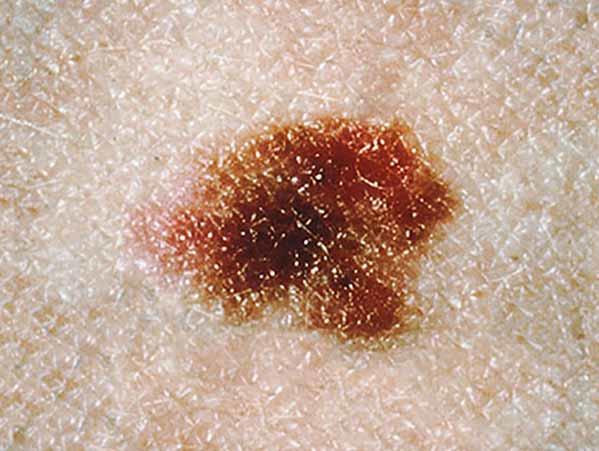 This dysplastic nevus is more than 10 millimeters wide (a little less than 1/2 inch).

Can a dysplastic nevus turn into melanoma?

What should people do if they have a dysplastic nevus?

Everyone should protect their skin from the sun and stay away from sunlamps and tanning booths, but for people who have dysplastic nevi, it is even more important to protect the skin and avoid getting a suntan or sunburn.

In addition, many doctors recommend that people with dysplastic nevi check their skin once a month (2, 4). People should tell their doctor if they see any of the following changes in a dysplastic nevus (2):

Should people have a doctor remove a dysplastic nevus or a common mole to prevent it from changing into melanoma?

No. Normally, people do not need to have a dysplastic nevus or a common mole removed. One reason is that very few dysplastic nevi or common moles turn into melanoma (1, 3). And most melanomas do not start as common moles or dysplastic nevi (2). That is why doctors usually remove only moles that have changed or new colored or otherwise suspicious areas on the skin.

Melanoma is a type of skin cancer that begins in melanocytes. It is potentially dangerous because it can invade nearby tissues and spread to other parts of the body, such as the lung, liver, bone, or brain. The earlier that melanoma is detected and removed, the more likely that treatment will be successful.

Most melanocytes are in the skin, and melanoma can occur on any skin surface. It can develop from a common mole or dysplastic nevus, but more often it develops in an area of apparently normal skin. In addition, melanoma can also develop in the eye (called uveal melanoma), under the nail, the digestive tract, and other areas of the body.

Often the first sign of melanoma is a change in the shape, color, size, or feel of an existing mole. Melanoma may also appear as a new colored or otherwise unusual area on the skin.

The "ABCDE" rule describes the features of early melanoma (2, 6): 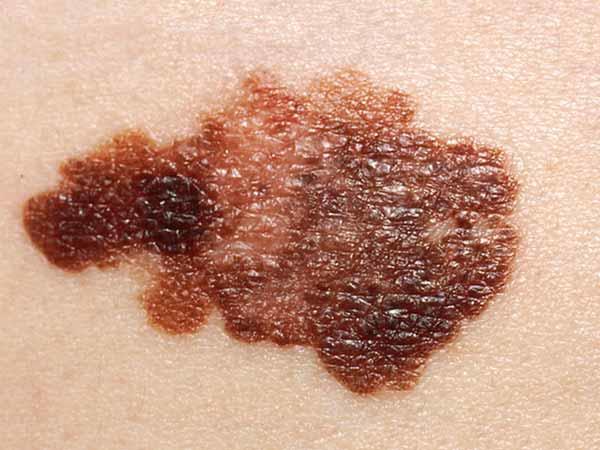 An uneven (asymmetric) melanoma with an irregular but distinct border. The melanoma is more than 20 millimeters wide (about the size of a postage stamp). 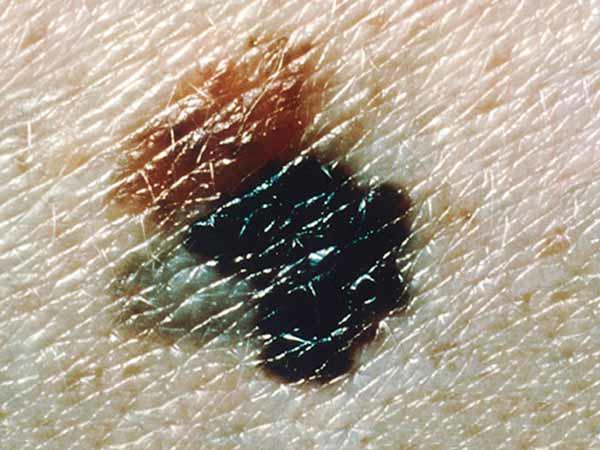 A blue-black melanoma that has irregular and scalloped borders. It has arisen from a dysplastic nevus (the pink-tan region at the upper left). The melanoma is about 12 millimeters wide (nearly 1/2 inch). 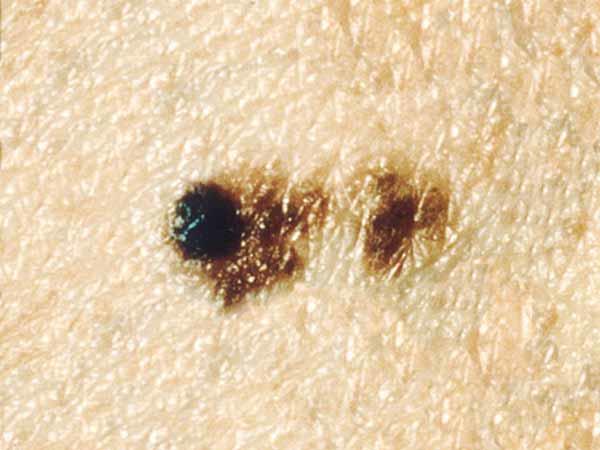 A dysplastic nevus with a black bump that was not there 18 months earlier. The black bump is a melanoma that is about 3 millimeters wide (about 1/8 inch). 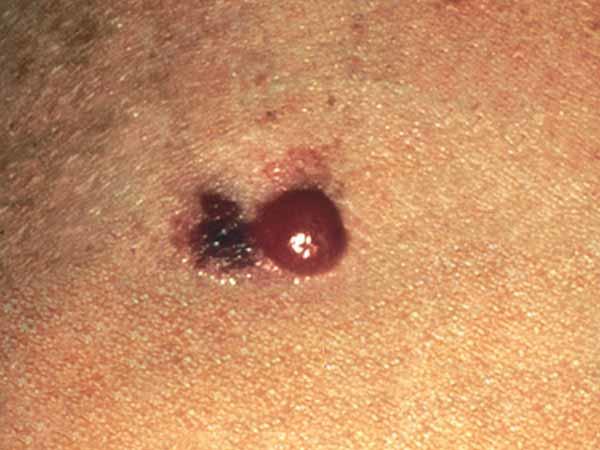 A melanoma with three parts—a dark brown or black area on the left, a red bump on the right, and an area that is lighter than the skin at the top. The melanoma is about 15 millimeters wide, or about as wide as a tube of lip balm.

In advanced melanoma, the texture of the mole may change. The skin on the surface may break down and look scraped. The mole may become hard or lumpy and the surface may ooze or bleed. Sometimes the melanoma is itchy, tender, or painful.

How is melanoma diagnosed?

The only way to diagnose melanoma is to remove tissue and check it for cancer cells. The doctor will remove all or part of the skin that looks abnormal. Usually, this procedure takes only a few minutes and can be done in a doctor's office, clinic, or hospital. The sample will be sent to a lab and a pathologist will look at the tissue under a microscope to check for melanoma.

What are the differences between a common mole, a dysplastic nevus, and a melanoma?

Common moles, dysplastic nevi, and melanoma vary by size, color, shape, and surface texture. The table below summarizes some differences between moles and cancer. Another important difference is that a common mole or dysplastic nevus will not return after it is removed by a full excisional biopsy from the skin, but melanoma sometimes grows back. Also, melanoma is cancer, so it can spread to other parts of the body.

What should people do if a mole changes or if they find a new mole or some other change on their skin?

People should tell their doctor if they find a new mole or a change in an existing mole. A family doctor may refer people with an unusual mole or other concerns about their skin to a dermatologist. A dermatologist is a doctor who specializes in diseases of the skin. Also, some plastic surgeons, general surgeons, internists, cancer specialists, and family doctors have special training in moles and melanoma.

What factors increase the risk of melanoma?

Although anyone can develop melanoma, people with the following risk factors have an increased risk of melanoma:

How can people protect their skin from the sun?

People can protect their skin from the sun by following the tips on NCI's Sunlight risk factor page. The best way to prevent melanoma is to limit exposure to sunlight. Having a suntan or sunburn means that the skin has been damaged by the sun, and continued tanning or burning increases the risk of developing melanoma.