The NCI Frederick campus is home to Frederick National Laboratory for Cancer Research (FNLCR), a government-owned, contractor-operated research and development center that provides a rapid response to emerging national and global health problems and conducts long-term research on cancer, as well as infectious and other diseases on behalf of the federal government. FNLCR’s facilities are on the NCI Frederick campus and at additional locations in Frederick, such as Riverside Research Park.

In addition to FNLCR—which encompasses multiple buildings—the campus is made up of numerous NCI cancer research labs, technology facilities, resource centers, and administrative offices. Most of the laboratories are part of NCI’s Intramural Research Program (IRP). IRP includes investigators whose expertise span a wide variety of disciplines and who share a mission to enhance cancer research, prevention, treatment, and training.

About two-thirds of the scientists who work at NCI Frederick are employees of the private sector company that is contracted to operate FNLCR for NCI (currently Leidos Biomedical Research, Inc.). Scientists conduct research supported by NCI’s Center for Cancer Research, Division of Cancer Treatment and Diagnosis, Division of Cancer Epidemiology and Genetics, National Institute of Allergy and Infectious Diseases, and other NIH and Department of Health and Human Services agencies.

NCI’s FNLCR is the only Federally Funded Research and Development Center (FFRDC) devoted exclusively to biomedical research. The lab works at the forefront of basic, translational, and clinical science. About 70% of the lab is focused on cancer research and 30% on infectious and other diseases, including HIV/AIDS, Zika and Ebola viruses, and COVID-19. FNLCR operates in the public interest as a shared national resource, collaborating with public and private partners to speed delivery of lifesaving therapies and prevention agents and conducts research on long-standing intractable cancers and other disease areas.

NCI’s presence in Frederick, Maryland goes back 50 years, to the months just before the signing of the National Cancer Act and what became widely known as the “war on cancer.” President Richard Nixon signed the National Cancer Act on December 23, 1971, calling it a “national commitment for the conquest of cancer.” In October of that year, Nixon ordered that 68 acres and 67 buildings belonging to the US Army at Fort Detrick in Frederick be converted into a leading center for cancer research to be led by NCI in partnership with the private sector.

The conversion of the property met two of Nixon’s goals: the termination of research on offensive biological weapons at Fort Detrick and the campaign to eradicate cancer. In the October 1971 announcement, Nixon said some of the nation’s most sophisticated scientific facilities at Fort Detrick would be “converted so effectively and so inexpensively to an intensive program of cancer research.”

Establishment of the NCI Frederick campus expanded laboratory space for NCI, whose main base of operations was, and is, on the NIH campus in Bethesda, Maryland. Today, in addition to the NIH and Frederick campuses, most administrative staff work at an NCI building at Shady Grove in Gaithersburg, Maryland. In addition, NCI operates labs in other localities in Maryland, as well North Carolina and Montana.

In 1975, the National Science Foundation notified the Department of Health and Human Services that the Frederick lab met the criteria for and was designated as a Federally Funded Research and Development Center (FFRDC). FFRDCs are government-owned, contractor-operated research facilities that operate in the public interest, collaborating with public and private partners to achieve research goals. Now called the Frederick National Laboratory for Cancer Research (FNLCR), a designation it has carried since 2012, it is the only national laboratory devoted entirely to biomedical research.

See the FNLCR website for research conducted at the lab.

NCI Frederick occupies a campus that is surrounded by, but not a part of, Fort Detrick. The campus includes labs and offices of FNLCR (owned by NCI and operated by a private contractor), NCI administrative offices that oversee the FNLCR contract, several labs operated by NCI’s Center for Cancer Research and Division of Cancer Treatment and Diagnosis, and other areas.

The main building of FNLCR is the Advanced Technology Research Facility (ATRF). It was completed in 2012 and is located in Riverside Research Park in Frederick, about 5 miles from the legacy NCI Frederick campus. ATRF consolidates labs and operations that had been scattered among more than 30 buildings on the NCI Frederick campus.

Additional facilities at NCI Frederick include the Central Repository and the Vaccine Pilot Plant. 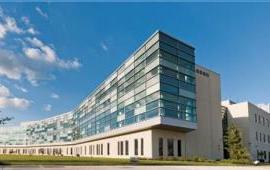