When people think about cancer research, they may envision men and women in lab coats, carefully dripping substances into test tubes or peering thoughtfully into microscopes. Of course, those things do happen in biomedical research. But they are just one small part of a much larger research landscape.

In reality, cancer research is a vast, complex enterprise that involves researchers from many different disciplines. It also relies heavily on the participation of patients and healthy volunteers, without whom cancer research would not be possible.

Cancer research happens in many places, such as:

An idea. That’s the genesis of a cancer research study.

It could be an idea for a large-scale project like The Cancer Genome Atlas, a multiyear effort that involved researchers from institutions across the country working collaboratively to catalogue all of the changes to DNA and molecules in more than 30 different cancer types. Or it could be something more modest, such as testing whether a text messaging service can help pregnant women quit smoking.

Findings from basic research, such as studies of cancer cells in the laboratory, can ultimately define research questions to study in humans, such as helping to identify drugs to test in clinical trials. And findings from clinical trials in humans can, conversely, generate hypotheses that need to be further investigated in cells or animal models in the lab. An epidemiologic study can help identify potential risk factors for certain cancers and generate hypotheses about what may cause some cancers or suggest possible preventive measures.

It’s all part of a continuum of innovation and knowledge that produces important biomedical advances. Each advance builds on the next, and each advance spurs new ideas.

Although studies of new cancer treatments often receive the most headlines, cancer research involves much more than testing new therapies.

Learning more about how to treat and prevent cancer entails the work of researchers from a wide range of disciplines, many of whom will never handle a frozen tissue sample or don a white lab coat or hospital scrubs.

Generally, biomedical research falls into four categories, each of which is essential to advances in cancer research overall.

Why do cancer cells grow and spread uncontrollably? What causes a cell to become cancerous in the first place?

To answer basic research questions like these, investigators study bacteria, viruses, fungi, animal cells and human cells (both healthy and cancerous) grown in the lab, and tumors in animals, such as mice and rats.

Basic research increases our knowledge and understanding of nature and its laws. This type of research can be driven by curiosity, often without regard to practical applications. However, basic research is the foundation for solving many practical and important problems. It provides the raw materials for tomorrow’s scientific and technical advances. Some examples of basic research in cancer biology might include:

Basic research requires painstaking attention to detail and often involves an iterative approach, meaning that individual projects can often span periods of months or years. But without basic research, it would be impossible to develop new ways to prevent and treat cancer. Basic research is the foundation on which much of the cancer research continuum is built.

Nearly every new treatment, test, or intervention for cancer must be rigorously tested in clinical trials to be sure that it is safe and effective before it can be used routinely in humans.

In clinical trials, researchers test drugs, medical devices, or other interventions in human volunteers, with the goal of improving all aspects of patient care.

Trials are used to find answers to many different clinical questions, such as:

Initial, or early-phase, clinical trials of a potential new therapy are very small, with just a handful of participants, and are conducted primarily to determine whether a new treatment is safe and to identify the best dose to test in larger trials.

Later-phase clinical trials, which often take several years or more to conduct, often involve hundreds or thousands of patients. These trials are used to determine whether a treatment is more effective and/or better tolerated than current treatments and should be used more broadly.

Increasingly, additional studies (often called correlative studies) are built into clinical trials. These additional studies are intended to help researchers better understand issues such as why some patients in the trial did or didn’t respond to a new treatment or how treatments affect patients’ quality of life.

Studying populations of people—their family histories and genetics, health behaviors and health histories, and environmental exposures—can provide important information about the causes of cancer and its consequences.

Are any risk factors (e.g., gene mutations, environmental exposures) common among people who develop a certain kind of cancer? After completing treatment for cancer, what was the state of the emotional and psychological well-being of the population studied? Often, these types of questions can only be answered by studying large groups of people.

Population-based research can identify associations or highlight trends that would be difficult or impossible to find otherwise. Important data about disparities in diagnosis or survival rates among certain racial or socioeconomic groups or the long-term health of pediatric cancer survivors, for instance, only came to light as a result of population-based research.

The results of basic and clinical research or population studies don’t exist in a vacuum. Some form the basis for interventions—for example, a new treatment or a strategy for improving use of a proven therapy—that are tested to determine whether they can improve health outcomes.

And if those studies suggest that an intervention can improve health outcomes, additional research is often needed to assess how it’s being used outside of a controlled study like a clinical trial or to test ways to overcomes barriers to its use in everyday clinical practice.

This type of research is often called translational research. In the context of medicine, it is often called bench to bedside or bedside to practice (also called “implementation research”).

Regardless, the ultimate goal of translational research is to help ensure that findings from earlier studies with the potential to affect clinical care are tested and, if shown to be effective, are eventually incorporated into everyday care in the most effective and efficient means possible.

Research Is Often a Marathon, Not a Sprint

Although these different areas of research are distinct in many ways, they also have something in common: they are often performed over a period of years and, in some cases, decades.

To take a finding in basic research, such as identifying a mutant protein that drives a particular cancer, and develop a drug that inactivates the protein and performs well in cells in the lab and in animal models can take years, if not decades.

Even once a drug makes it to late-phase clinical trials, patients must be followed for several years, or even a decade or more, to determine whether the new treatment is more effective than current treatments. And, in population-based studies, researchers typically collect a substantial amount of data on the groups being studied and often follow them (via interviews, surveys, medical records, etc.) for many years.

Cancer researchers are increasingly using advanced technologies that are capable of providing far more information and detail than was previously possible, propelling the shift toward precision medicine. Some of these technologies include:

And cancer research now involves collaborative efforts from researchers in disciplines such as physics, advanced mathematics, structural biology, nanotechnology, and many more, who have introduced new concepts and approaches to studying cancer.

There is also greater collaboration among the chief funders of cancer research: the government, the private sector, and nonprofit organizations. This collaboration is allowing patients and advocates to become more involved in guiding and developing studies and allowing researchers to overcome issues related to intellectual property that can sometimes stall or halt important research projects.

NCI is the largest funder of cancer research in the world. The institute’s annual budget, which is set by Congress, is approximately $6.9 billion. These funds support the infrastructure that sustains cancer research performed at NCI and at cancer centers, hospitals, community clinics, and universities across the United States and around the world.

NCI has a number of divisions and centers that either conduct research or manage research programs.

The NCI intramural program is carried out by both government and contract staff, who conduct research at one of several campuses in suburban Maryland. Intramural research spans the research continuum. 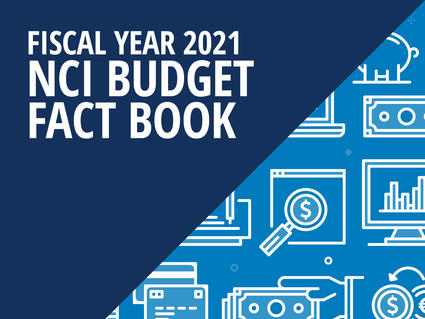 A summary of NCI’s expenditures for FY 2021, as well as funding policies related to research grant awards.

In both the intramural and extramural programs, NCI conducts and supports research on rare cancers. This work is an important part of NCI’s mission and allows the institute to support research into cancers not typically of interest to the private sector. As a federal agency, NCI is able to study interventions and drugs that also might not be of interest to the private sector, for instance because they are no longer under patent protection or they are not anticipated to be profitable.

Like other components of the federal government, NCI must operate within the confines of its budget. Because medical inflation has outpaced general inflation and NCI has had a relatively flat budget over much of the last decade, the institute’s purchasing power has declined substantially.

NCI senior leadership has worked closely with its advisory boards to make difficult choices about funding, including whether to fund a project or program at all or adjust their funding levels. Decisions about funding are heavily influenced by the areas of research considered by NCI leadership and its advisory boards to be the highest priority and have the greatest potential to produce important advances and improve patients’ lives.