The Importance of Cancer Prevention Research

Cancer prevention efforts have contributed to the decline in the overall rate of new cancer cases in the United States. Yet, at the same time, the total number of new cancers diagnosed each year is increasing because of changes in the size and age of the population, increased use of screening, and changes in risk factors like obesity. In 2020, an estimated 1.8 million people in the United States will be diagnosed with cancer.

In the past two decades scientists have estimated that more than half of cancers could have been prevented by applying the knowledge we have now. While increased risk for some cancers is caused by inherited genetic factors (about 5%–10% of cancer cases), most cancers are caused by environmental and lifestyle factors. For example, scientific evidence shows that reducing exposure to cancer-causing substances such as tobacco, vaccinating against human papillomavirus (HPV), and maintaining a healthy weight and engaging in physical activity can reduce the risk of cancer.

In addition, some cancer screening tests, such as the HPV DNA test for cervical cancer and colonoscopy for colorectal cancer, can aid in cancer prevention in addition to early detection. These tests detect precancerous lesions that can be removed or destroyed before they progress to cancer, thus reducing the incidence of the disease.

NCI supports a broad variety of research in cancer prevention, including studies to understand the causes of cancer and to identify and test new prevention approaches. NCI’s commitment to funding cancer prevention research is especially important because the private sector is hesitant to initiate such research due to the many economic, logistical, regulatory, and legal considerations that must be addressed.

NCI funding has contributed to major advances in cancer prevention, including:

The Future of Cancer Prevention Research

Many opportunities exist to make greater progress in cancer prevention. Just as we are increasingly able to identify the best treatments for a person’s cancer based on the genetic abnormalities of their tumor, fully characterizing a person’s genetic makeup and understanding their environmental exposures over time will enable us to tailor personalized measures to screen for and prevent cancer.

Discoveries made in cancer biology, immunology, and vaccine science are using the power of the immune system to prevent cancers that are not caused by infectious agents, which represent most new cancer cases. In the future it will be possible to vaccinate individuals at high risk of certain nonviral-associated cancers, such as those with hereditary cancer syndromes, training their immune systems to protect them against cancer development.

The development and implementation of effective prevention strategies means fewer people will have to face the physical, psychological, social, and financial harms of cancer and its treatment. 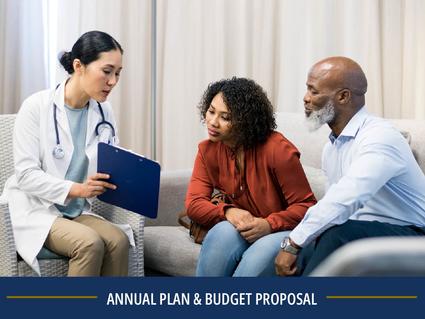 Each year, NCI prepares a plan for advancing cancer research and proposes the budget required to fund a broad research portfolio.

NCI prepares an Annual Plan & Budget Proposal for the President and Congress that describes the Institute’s scientific priorities and promising opportunities from across the research continuum. Included in the plan is the following strategic vision and approach for improving cancer prevention.

More cancers will be prevented because a person’s cancer risk will be known and be effectively reduced.

Understanding a person’s genetic risk factors and environmental exposures over time should enable us to tailor personalized measures to prevent cancer. Working toward this future, NCI’s goals include the following:

Opportunities exist to identify new genetic and environmental risk factors for cancer, in addition to those already known, and to understand how genes and the environment interact to influence cancer risk. Our major objectives include:

NCI is committed to discovering new cancer prevention approaches, including strategies based on an increased understanding of biological and behavioral factors. Among our major objectives are: