Although the immune system can pack a powerful punch against cancer, many tumors find ways to turn off or block immune cells. But NCI researchers may have found a clever way to give immune cells the upper hand—by disguising the cancer as a viral infection.

In a study involving mice, injecting small pieces of a virus directly into tumors activated immune cells, shrank tumors, and kept them from growing back.

“So, you are fooling the immune system into thinking, ‘I have this big virus infection, I better go attack it,’” Dr. Schiller said.

To make sure the immune cells mount a robust and relentless attack, the researchers used peptides from cytomegalovirus (CMV), a virus that most people’s immune systems have seen before. Around 5 out of 10 people in the United States and 8 out of 10 worldwide are infected with CMV, and it usually doesn’t cause any symptoms.

When the researchers injected CMV peptides into tumors in mice that were previously infected with CMV, the treatment shrank tumors—sometimes completely—and helped the mice live far longer than those treated with a placebo. The findings were published June 24 in the Proceedings of the National Academy of Sciences.

“I think this [study] is a very clever way of using [CMV], so I am curious to see what happens in clinical trials,” he said.

Leveraging the immune response to CMV

Once you’ve been infected with CMV, it sticks with you for life as a chronic, or latent, infection. As long as you have a healthy immune system, you probably won’t experience any symptoms.

But even if you don’t know you’ve been infected with CMV, your immune system does. CMV infection generates massive amounts of immune cells called T cells that hunt down CMV. Not only that, but multiple kinds of CMV-fighting T cells are generated, Dr. Çuburu noted.

“And it’s one of the few immune responses that gets better as you get older. Normally, immunity goes downhill” as we age, Dr. Schiller added.

In 2016, Dr. Schiller’s group discovered that the outer shell of human papillomavirus (HPV) binds the outsides of cancer cells but not healthy cells. In follow-up experiments, they found that small CMV peptides did an even better job of killing cancer cells than delivering the corresponding CMV genes by an HPV-based gene delivery vehicle.

For the new study, they created a mixture of peptides from various parts of the mouse version of CMV. To test the peptides, the researchers first infected mice with mouse CMV, prompting the mice to make anti-CMV T cells. Six months later, when the infection became latent, the mice were implanted with lung cancer cells that quickly developed into tumors. 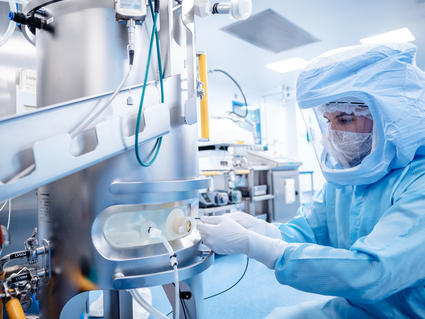 Trials have been underway for nearly a decade and shown promising early results.

The NCI team then injected the tumors several times with either a physiological salt solution or a mixture of CMV peptides plus a chemical that boosts the immune response.

The mice with no remaining tumors and long-lasting survival were considered cured of their cancer.

A major draw of immunotherapy is the potential to generate long-term protection against cancer. And that’s exactly what the NCI team saw with the CMV peptide treatment.

First, CMV-fighting T cells kill cancer cells coated with CMV peptides because they look infected. Then, like sharks sensing blood in the water, cancer-fighting T cells sniff out cancer cell guts that have spilled out, prompting them to attack cancer cells. And third, other cancer-fighting immune cells enter the tumor and release signals that egg on the attack. All of that combined creates long-lasting protection against cancer.

“That’s why it’s so powerful to harness these anti-CMV T cells, because they can do the job of many different [immunotherapies] at once,” Dr. Çuburu emphasized.

There are several potential advantages of this approach over currently used cancer immunotherapies, the scientists explained. For one, synthetic virus peptides can be made easily and in large quantities, they pointed out.

And the treatment wouldn’t have to be tailored to each individual patient, or even to a particular type of cancer. In contrast, some immunotherapies—such as CAR T-cell therapy and vaccine therapy—are typically custom made for each patient, making them time-consuming and expensive to produce.

This CMV peptide treatment “is a simple, off-the-shelf product that you could even use in low-resource settings because it doesn’t require sophisticated molecular profiling of tumors,” Dr. Schiller said.

But a caveat is that “this will only work in CMV-positive people. So, you have to check first if someone has CMV already or not,” Dr. Früh noted.

Another caution, Dr. Früh said, is that mice injected with high doses of CMV peptides became very sick. It’s not clear why, he said, but it’s possible that anti-CMV T cells attacked healthy tissues that were accidentally coated with the high dose of viral peptides.

In mice, that toxicity could be controlled by lowering the dose of the peptides without changing how well the treatment worked, Dr. Çuburu noted.

With all this in mind, the NCI researchers are setting their sights on a clinical trial of the CMV peptide treatment.

“We are trying to push this forward and bring more proof of concept in human [tumor samples] that could lead to a clinical evaluation,” Dr. Çuburu said.