Will a specific cancer treatment actually work for a person diagnosed with cancer? Every person’s cancer is different, and even when a tumor has a genetic change for which there’s a matching targeted therapy, there’s no guarantee a given treatment is going to work.

But based on the results of a small study, funded in part by NCI, a team of researchers hopes to soon offer oncologists a new tool to guide treatment choices for their patients.

The tool is a new type of personalized tumor model, called micro-organospheres. And in a small study of eight people with advanced colorectal cancer, the researchers used the model to accurately predict whether the chemotherapy drug oxaliplatin would shrink their tumors.

Results from the study, led by Xiling Shen, Ph.D., the CEO of the biotechnology company Xilis, were reported June 2 in Cell Stem Cell.

To create the micro-organospheres, the research team takes tissue from a patient’s tumor biopsy and runs it through a desktop device, about the size of a standard printer. The end product: thousands of three-dimensional mini-replicas of the cancer suspended in tiny compartments on a lab dish.

Creating the models required much less tumor tissue than is usually required to grow other cancer models that use a patient's own tumor tissue, Dr. Shen and his colleagues reported. And they were created quickly, in less than 2 weeks. That is much faster than similar models can be created, explained one of the study’s leaders, David Hsu, M.D., Ph.D., of the Duke Cancer Institute.

Their analyses also showed that the micro-organospheres largely retained the molecular features of the tumors from which they were created. And the models had many other components of the tumor's surroundings, including immune cells and structural cells. The makeup of this tumor “microenvironment,” as it’s called, can influence how tumors respond to treatment.

The micro-organospheres “overcome a lot of the barriers” that have prevented similar tumor models from being used to help direct everyday patient care, Dr. Hsu said.

A larger study is being launched to determine whether these early findings hold up. Dr. Shen and Dr. Hsu, along with a third member of the team, Hans Clevers, M.D., Ph.D., of the pharmaceutical company Roche and a pioneer in organoid technology, jointly founded Xilis in 2019 to commercialize the technology.

The findings from this first study “are just a proof of concept,” Dr. Hsu acknowledged. “We need a larger study to … have the data needed to say if [these models] precisely capture patients’ response to treatment.”

From PDX and organoids to micro-organospheres

Cancer models, including tumor cell lines and animal models, are widely used research tools. They usually serve as generalized stand-ins for a specific type or form of cancer.

But over the past decade, researchers have taken these representations of cancer to the next level, developing personalized models created from individual patients’ tumor tissue. Efforts to create these patient-derived tumor models, as they’re called, are considered to be an important part of a concept known as precision oncology: treating a patient’s cancer based on its unique clinical and molecular features.

Because they grow as human tumors in living tissue, there was initially great hope that PDXs might be used to direct care for individual patients, explained Konstantin Salnikow, Ph.D., of NCI’s Division of Cancer Biology and who oversees NCI’s Patient-Derived Models of Cancer program. 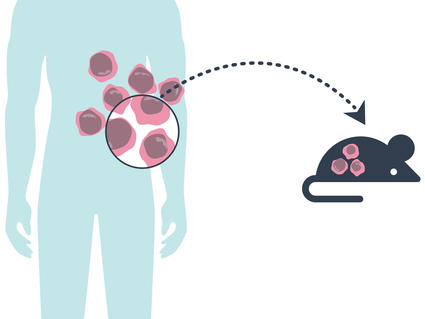 The mice retain the genetics of human tumors from which they were created.

But it soon became clear that because of certain limitations, in their current forms, PDX models may primarily be most useful as research tools and not to help direct the care of individual patients, Dr. Salnikow said.

Those limitations include the time it takes to establish them—a minimum of several months, and “sometimes up to a year,” Dr. Salnikow said. And because PDX mice lack functioning immune systems, he added, they can’t capture the important interactions between immune cells and tumors, which can influence how cancer treatments work.

Organoids, which are created using specific types of stem cells in tumor tissue, are grown in laboratory dishes. These models can be created somewhat more quickly and inexpensively than PDX models.

But when it comes to cancer, treatment typically needs to begin quickly after diagnosis, usually within a few weeks, said Dr. Hsu, who specializes in treating colorectal cancer.

Not only does creating organoids require a relatively large amount of tumor tissue—which isn’t always easy to come by—it also can take several months. In addition, the number of organoids produced is relatively small. For the time being, these factors may limit their potential for use in everyday patient care, he explained.

Micro-organospheres are intended to address both models’ limitations.

An electrical engineer by training, Dr. Shen developed the system for creating micro-organospheres at Duke. He recently left the university to lead Xilis full time.

The system’s lynchpin is a technology called microfluidics, which allows for precise handling of very small amounts of material suspended in specialized liquids. Producing the micro-organospheres also involves growing the collected cells in oil-based droplets, which required the researchers to develop a way to then remove the oil without harming the cells.

The entire process is highly automated and takes place in a small, desktop device. By automating production, the system eliminates much of the variability involved in growing organoids, which requires multiple manual steps, and streamlines the entire process, Dr. Shen explained.

As a result, he continued, there won’t be “different results depending on who cultured [the] cells.”

And rather than a just few organoids or PDXs, the product that emerges from the system is “thousands of miniaturized tumors,” Dr. Shen said, “and those mini-tumors are ready for drug testing within days.”

To test the system’s performance, the researchers first showed that they could establish micro-organospheres from human tumors grown in a PDX model and do it quickly. They then moved on to creating the models directly from human tumor tissue, specifically from a core needle biopsy taken from a person recently diagnosed with advanced colorectal cancer.

Not only were they able to create a large number of micro-organospheres from this sample, they reported, but they did it in 8 days.

When they tested a large set of commonly used cancer drugs against the micro-organospheres, they found that those that were treated with oxaliplatin were readily killed. Oxaliplatin, they reported, also shrank tumors in the patient from which the models were created. (The result from the testing on the micro-organospheres played no role in determining whether the patient would receive the treatment.)

They then expanded the study to include seven more people recently diagnosed with colorectal cancer, creating micro-organospheres for each patient in less than 2 weeks from the time of their biopsies.

To get a better idea of the extent to which micro-organospheres actually represent patients’ tumors, the research team analyzed tumor samples from people with lung, ovarian, and kidney cancers and compared them with the respective micro-organospheres created from those tumors.

Important genetic features and specific genetic changes, such as mutations of specific cancer-related genes, were largely the same in the micro-organospheres and tumor samples from which they were created, the research team reported.

The micro-organospheres also contained many of the same noncancer cells found in the tumor tissue samples, and in similar amounts. These included immune cells and cells called fibroblasts, both important components of tumor microenvironment, Dr. Salnikow stressed.

“That’s dramatically different than what you get with PDX [models], where human and mouse cells are mixed together,” he said.

Additional testing of immune-based treatments also showed that immune cells in the micro-organospheres behaved as expected in response to the therapies.

These analyses provided information about the micro-organospheres “that is important for us to see in terms of developing a precision oncology platform,” Dr. Salnikow said.

The next step in advancing the technology is to see how it performs in larger groups of patients and in people with different cancer types, Dr. Hsu said.

A study will soon start recruiting about 250 people with colorectal cancer that has spread to their liver, Dr. Hsu said. The researchers are also planning small studies in people with breast cancer. 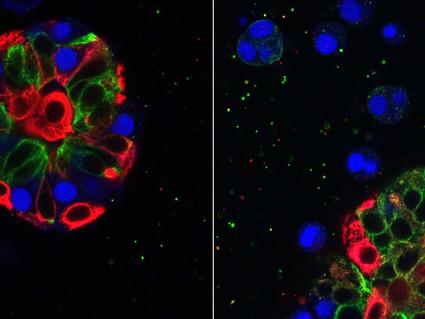 Dr. Salnikow called the model a “breakthrough” because it overcomes many of the shortcomings of other patient-derived models.

He cautioned, however, that improvements are likely needed for micro-organospheres to have a significant impact on guiding patient treatment. Among the most important upgrades, he believes, is incorporating a way to mimic how cancer drugs are processed, or metabolized, by the body, which can affect their impact on tumors.

For simpler drugs, like oxaliplatin, he explained, the current system may be adequate. But Dr. Salnikow noted that many cancer drugs are more challenging for the body to metabolize, and “those drugs need to be tested with a system that incorporates drug metabolism,” he said.

Other researchers are developing similar patient-derived tumor models, he continued. Some may be more suitable than others for predicting whether a given patient will respond to treatment, depending on the specific therapy or type of cancer the person has.

“All models are an approximation. The goal is to get as close as possible to how the cancer is behaving in humans,” Dr. Salnikow continued. Even the best models will never be perfect. “There are so many factors that [affect response to treatment],” he said. “Many that we don’t even know about yet.”