NCI-funded researchers are working to advance our understanding of how to prevent, detect, and treat lung cancer. There has been a great deal of progress made, for scientists are identifying many different genetic alterations that can drive lung cancer growth.

This page highlights some of the latest research in lung cancer including clinical advances that may soon translate into improved care, NCI-supported programs that are fueling progress, and research findings from recent studies.

A great deal of research has been conducted in ways to find lung cancer early. Several methods are currently being studied to see if they decrease the risk of dying from lung cancer.

The NCI-sponsored National Lung Screening Trial (NLST) showed that low-dose CT scans can be used to screen for lung cancer in people with a history of heavy smoking. Using this screening can decrease their risk of dying from lung cancer. Now researchers are looking for ways to refine CT screening to better predict whether cancer is present.

Markers in Blood and Sputum

Scientists are trying to develop or refine tests of sputum and blood that could be used to detect lung cancer early. Two active areas of research are:

Machine learning is a method that allows computers to learn how to predict certain outcomes. In lung cancer, researchers are using computer algorithms to create computer-aided programs that are better able to identify cancer in CT scans than radiologists or pathologists. For example, in one artificial intelligence study, researchers trained a computer program to diagnose two types of lung cancer with 97% accuracy, as well as detect cancer-related genetic mutations.

Treatment options for lung cancer are surgery, radiation, chemotherapy, targeted therapy, immunotherapy, and combinations of these approaches. While researchers continue to look for new treatment options for all stages of lung cancer, scientists currently have some promising results for advanced-stage disease, which are listed below.

Immunotherapies work with the body's immune system to help fight cancer. They are a major focus in lung cancer treatment research today. Clinical trials are ongoing to look at new combinations of immunotherapies with or without chemotherapy to treat lung cancer. 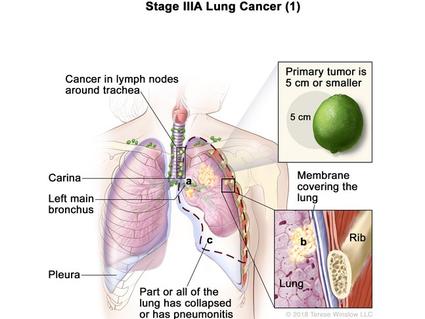 Atezolizumab is approved to treat some people with non-small cell lung cancer after surgery.

An immune checkpoint inhibitor is a drug that blocks proteins on immune system cells which then allows them to fight cancer. Several immune checkpoint inhibitors have recently been approved for advanced lung cancer. These inhibitors, which increase the strength of anticancer immune responses, target the proteins PD-L1 and PD-1. Patients whose tumors test high for PD-L1 proteins may be more responsive to this type of treatment than others, but more studies are needed.

A key issue with immunotherapies is deciding which patients are most likely to benefit. One marker for immunotherapy response is tumor mutational burden, or TMB, which is the total number of mutations in the DNA of the cancer cells. In lung cancer, positive responses to checkpoint inhibitors have been linked with a high TMB in some trials.

ALK inhibitors target the cancer-causing alteration in the ALK gene. These drugs continue to be refined for the five percent of lung cancer patients who have an ALK gene alteration. In addition to approved treatments such as ceritinib (Zykadia) and crizotinib (Xalkori), there have been recent approvals of:

These recently approved ALK inhibitors are improvements from previous ones in their enhanced ability to cross the blood–brain barrier. This progress is critical because, in non-small cell lung cancer patients with ALK alterations, disease progression tends to occur in the brain.

EGFR inhibitors block the activity of a protein called epidermal growth factor receptor (EGFR). EGFR may be found at higher levels than normal on cancer cells, causing them to grow and divide. Some drugs that target EGFR that are approved for treating lung cancer are:

The ROS1 gene makes the protein ROS1, which is involved in cell signaling and cell growth. A small percentage of non-small cell lung cancer patients have altered forms of the ROS1 gene. Crizotinib (Xalkori) and entrectinib (Rozlytrek) are approved as treatments for patients with these alterations.

The BRAF gene makes the protein, B-Raf, which is involved in sending signals in cells and cell growth. This gene may be altered in some patients with non-small cell lung cancer, which can increase the growth and spread of cancer cells.

A combination of the drug dabrafenib (Tafinlar), which targets a specific mutation in the BRAF gene, and trametinib (Mekinist), which targets a protein called MEK, has been approved as treatment for certain patients with non-small cell lung cancer.

Many NCI-funded researchers at the NIH campus, and across the United States and the world, are seeking ways to address lung cancer more effectively. Some research is basic, exploring questions as diverse as the biological underpinnings of cancer and the social factors that affect cancer risk. And some is more clinical, seeking to translate basic information into improved patient outcomes. The programs listed below are a small sampling of NCI’s research efforts in lung cancer.

The following are some of our latest news articles on lung cancer research: