For People with Cancer, Are Steroids the Best Treatment for Breathing Problems?

People with advanced cancer can have a host of symptoms that harm their quality of life. For those with trouble breathing, called dyspnea, drugs called corticosteroids are often prescribed to provide relief.

But in a new study—the largest ever clinical trial of steroids for dyspnea caused by advanced cancer—these drugs didn’t improve breathing any more than a placebo. And people treated with steroids were more likely to have serious side effects.

Findings from the NCI-funded trial appeared September 7 in Lancet Oncology.

“This study doesn't close the book on corticosteroid use,” said David Hui, M.D., of The University of Texas MD Anderson Cancer Center, who led the study. Many factors, such as what’s causing a patient’s dyspnea, will still play a role in deciding whether to try steroid treatment for an individual.

“But we have to recognize there could be risk, and [these results] can be part of that decision-making process,” Dr. Hui said.

The team that led the trial is currently looking at whether levels of some proteins in the blood that can be signs of inflammation may help doctors predict who is likely to get more benefit than harm from steroids to treat dyspnea.

“[Steroids] may actually work very well for patients when inflammation is the primary contributor [to dyspnea],” added Sandra K. Hanneman, Ph.D., a nursing researcher at Cizik School of Nursing at UTHealth Houston, who participated in the study. “But they shouldn’t be used routinely for everybody, because there can be serious side effects.”

A frightening and common symptom for people with advanced cancer

Almost three-quarters of people with advanced cancer experience dyspnea. Tumors that have spread to the lungs are one common cause. But many other hallmarks of advanced cancer can also cause trouble breathing. These include inflammation, fluid trapped between the lungs’ membranes, obstruction of the upper airway, tissue damage from chemotherapy or radiation therapy, and loss of muscle in the chest area.

Regardless of the cause, the result for people with advanced cancer can be significant distress.

“Difficulty breathing is one of the most challenging symptoms for patients to experience. It can be incredibly frightening,” explained Diane St Germain, R.N., M.S., a program director of Symptom Science in NCI’s Division of Cancer Prevention, who was not involved in the study.

Dyspnea can trigger anxiety and limit everyday activities, she added. And people with dyspnea can find it challenging to find a comfortable position, and their sleep is often negatively affected.

It can often be difficult to pinpoint the cause of a person’s dyspnea, so treatment may be a matter of trial and error. Oxygen therapy or opioids are sometimes prescribed to relieve dyspnea, but may only provide partial relief. 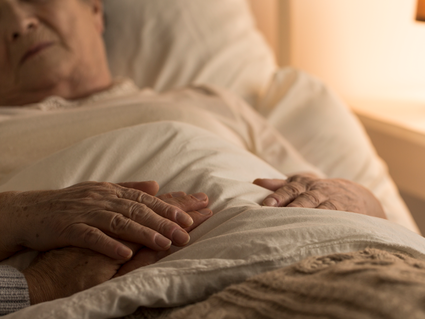 Few effective treatments are available for this common, debilitating side effect.

Some people are helped by nondrug interventions, like changing body position and using fans to create air flow around a patient, Dr. Hanneman explained. But these strategies haven’t been studied in detail.

As the drugs started to become widely used in people with advanced cancer, Dr. Hui and his colleagues wanted to better understand the full picture of how steroids affect people with dyspnea.

Relief from steroids, but also from a placebo

The trial enrolled 149 people with advanced cancer and moderate to severe dyspnea. Participants, whose average age was 65, were randomly assigned to get 2 weeks of treatment with either high doses of a steroid called dexamethasone or identical placebo pills. All participants had to meet certain health criteria that made it safe for them to receive steroids.

After the first 128 participants had finished 2 weeks of treatment (85 who received steroids, 43 who received placebo), the data safety and monitoring board overseeing the trial recommended it be stopped early. No difference in dyspnea had been observed between the groups.

The average dyspnea score dropped by about a point and a half for people in both groups.

“Anything over one point is considered an improvement,” said Dr. Hui. “But the interesting thing to me is that the placebo [group] did just as well.”

Many things could have contributed to the equal improvement, including the extra attention provided by the care team, or the placebo effect, he explained. The placebo effect occurs when people feel better due to the anticipation that a treatment will help.

People who received steroids reported better appetite and overall well-being, but worse anxiety and depression, than those in the placebo group.

Who benefits from steroids for trouble breathing?

Many questions about using steroids to treat dyspnea remain, said Dr. Hui. In addition to finding ways to identify people for whom steroids are a good choice, it’s also unclear whether lower-dose steroids or shorter courses of treatment could reduce the risk of side effects while maintaining symptom relief, he added.

Determining the cause of someone’s dyspnea can drive the treatment approach, Ms. St Germain explained. But the challenge, she continued, is that there is often more than one cause.

To make it even more complicated, the time of day when dyspnea occurs, how long it lasts, and whether its intensity waxes and wanes can vary between patients, added Dr. Hanneman. “It’s such an individual experience,” she says.

It’s also important for clinicians to talk with patients about their priorities, Dr. Hanneman said.

“If dyspnea is someone’s most distressing symptom and nothing else is working, and starting [steroids] seems a bit risky, you might try it anyway,” she said. “Because what you have in front of you is a very distressed patient. If the side effects become more problematic than the dyspnea, you can always take the patient off [the steroids].”

The complexity of the symptom and its treatment highlights the benefits of people with advanced cancer being seen by a palliative care team whenever possible, said Ms. St Germain.

“Care for these patients can be so complicated, and [it] needs to be personalized. One size is not going to fit all.”