UPDATE: Results from the first phase 3 clinical trial of sotorasib (Lumakras), called CodeBreaK 200, were presented September 12, 2022, at the European Society for Medical Oncology annual meeting. All 345 patients in the trial had non-small cell lung cancer (NSCLC) with the KRAS G12C mutation, and all had NSCLC that had gotten worse despite previous treatments. At one year after starting treatment, approximately 25% of those receiving sotorasib had cancer that had not worsened compared with 10% of people treated with the chemotherapy drug docetaxel. In April 2022, results from the CodeBreaK 100 trial showed that approximately 51% of people with KRAS G12C NSCLC were still alive 1 year after starting treatment with sotorasib, and 33% were still alive after 2 years.

Doctors and scientists have known for decades that harmful mutations in a gene called KRAS are the root cause of cancer for hundreds of thousands of people. But there have been no effective treatments that counteract the cancer-fueling actions of mutant KRAS proteins—until now. On May 28, the Food and Drug Administration (FDA) granted accelerated approval to the first KRAS-blocking drug, called sotorasib (Lumakras).

The approval is “really exciting, no question about that. It’s a big breakthrough in the whole field,” said Frank McCormick, Ph.D., scientific consultant for NCI’s RAS Initiative. For many years, KRAS was considered an “undruggable” target. But a better understanding of the protein’s biology, paired with new technologies, has made the once seemingly impossible goal of a KRAS inhibitor a reality.

Under the new approval, sotorasib can be used to treat people with non-small cell lung cancer (NSCLC) that has spread nearby (locally advanced) or to distant locations (metastatic) in the body. Patients must have previously received at least one other systemic cancer treatment, such as chemotherapy, and have a particular KRAS mutation, known as G12C, in their tumors.

FDA also approved two tests—Qiagen therascreen KRAS RGQ PCR kit and Guardant360 CDx—that can be used to check for the G12C mutation in a person’s tumor tissue or blood, respectively. Around 13% of people with NSCLC have the G12C mutation.

The new approval is based on initial results from a study that included 124 people with KRAS G12C-mutant NSCLC who had previously received other treatments. In the clinical trial, called CodeBreaK 100, sotorasib shrank the tumors of 36% of participants. And those tumor responses lasted for a median of 10 months. In contrast, standard therapies shrink tumors in less than 20% of people with NSCLC that has come back after previous treatment, and those effects are usually short-lived.

“I have many patients with KRAS G12C that have had several lines of therapy and … now we have a new option for them to try. That’s pretty exciting,” said David Carbone, M.D., Ph.D., a lung cancer specialist at the Ohio State University Comprehensive Cancer Center.

Under FDA’s accelerated approval, Amgen—the company that makes sotorasib—must carry out an additional trial to confirm that the treatment helps patients with NSCLC live longer without their cancer getting worse.

A larger study comparing sotorasib with standard chemotherapy for advanced NSCLC is currently under way. Other studies are testing sotorasib in combination with other cancer treatments.

The CodeBreaK 100 trial, funded by Amgen and NCI, is testing sotorasib (previously called AMG510) as a treatment for people with solid tumors that have KRAS G12C. The mutation, a hallmark of damage from cigarette smoke, is most common in lung cancer. It is also found less frequently in colorectal cancers and in a small fraction of pancreatic cancers.

Most trial participants with NSCLC had previously received treatment with immunotherapy and/or chemotherapy. Everyone in the study received sotorasib—taken as a pill once a day—until their disease worsened, they withdrew from the trial, or they had to stop taking it because of side effects. Participants’ outcomes were tracked for a median of 15 months.

Of the 124 patients with NSCLC who could be evaluated, tumors completely disappeared in 4 people and partially shrank in 42 people. An additional 54 people had stable disease, meaning their cancer didn’t get better or worse.

Participants lived for a median of 13 months overall and a median of 7 months without their cancer getting worse.

The fact that the treatment kept patients’ cancer at bay for only 7 months was “disappointing,” said Dr. Carbone. Some other targeted therapies for lung cancer have shown “much better durability,” he explained.

But researchers still have to figure out the best way to use sotorasib to treat lung cancer, he continued. It’s possible that the drug may be more effective as an initial, or first-line, therapy, he said.

Another challenge is identifying patients who have the G12C mutation in their tumors and who qualify for sotorasib treatment. Although biomarker testing—a way to look for genes, proteins, and other substances that can provide information about a person’s cancer—is recommended for people with lung cancer, many patients aren’t getting those tests.

“There’s a lot of room for improvement in [the uptake of] testing,” Dr. Carbone said.

Side Effects of Sotorasib

Among people with NSCLC in the CodeBreaK 100 trial, 70% experienced a treatment-related side effect—most commonly diarrhea, pain in the muscles or bones, and nausea. Although most side effects were mild, 25 people (20%) experienced a serious side effect and one had a life-threatening side effect.

There were no treatment-related deaths among people with NSCLC, but one person in the study with a different kind of cancer died of inflammation in the lungs (called interstitial lung disease or pneumonitis) that was thought to be caused by the treatment.

For 28 patients (22%), side effects led to a pause, a reduction, or both, in the dose of sotorasib. Nine people (7%) stopped the treatment because of side effects.

Preliminary results from the full study group, which includes people with several different kinds of cancer, were published September 2020 in the New England Journal of Medicine.

A Stampede of KRAS Research 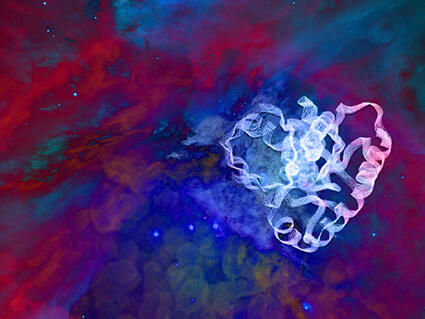 A handful of other KRAS G12C inhibitors are on the heels of sotorasib and are currently being tested in clinical trials. And there are likely more to come.

The discovery and approval of sotorasib “opens up opportunities for developing compounds that bind to other mutant [KRAS] proteins,” Dr. McCormick said. G12C is one of several KRAS mutations found in cancer cells. The two most common KRAS mutations are called G12D and G12V.

KRAS normally acts like a light switch, toggling between being “on” and “off.” When it is on, the protein sends signals that tell the cell to grow and divide. When mutated, however, the protein rarely switches off, leading to uncontrolled cell growth. Sotorasib and other G12C inhibitors work by permanently locking KRAS G12C in the off position.

But G12D and G12V can’t be targeted the same way because they have different chemistries than G12C. “It’s been a long and hard road to find compounds that bind effectively to those particular mutants,” Dr. McCormick said. However, he added, what researchers have been learning from KRAS G12C inhibitors has accelerated progress toward inhibitors of G12D and G12V.

In fact, several KRAS G12D inhibitors are in development and, according to Dr. McCormick, will likely enter clinical trials in the next year or so.

Researchers involved in NCI’s RAS Initiative, as well as others, have also made progress designing pan-KRAS inhibitors—drugs that work against several different KRAS mutant proteins. A few of these drugs are also on track to reach clinical trials in the next few years.