It’s no secret that mutations in specific genes can cause normal cells to become cancerous and supercharge their ability to form tumors.

A new study by researchers at Harvard Medical School suggests that one of these mutations, in the IDH1 gene, may do more than cause cancerous changes inside cells. A molecule called D-2HG that is released in large amounts by cancer cells with IDH1 mutations acts as a type of force field by neutralizing nearby immune cells, they found.

As cells produce the energy they need to function, a process called metabolism, they create molecular products called metabolites. D-2HG is a metabolite that is only made by cells with mutations in IDH genes, which includes IDH1 and IDH2. Metabolites like D-2HG that are found at higher levels in cancer cells than normal cells—and presumed to fuel cancer in some way—are often called oncometabolites.

Conducted largely using cells in lab dishes, the study showed that after being released by cancer cells into their surrounding environment, D-2HG is quite busy. First, it is readily taken up by immune cells called T cells. And once inside, it disrupts the T cells’ ability to kill cancer cells.

Results from the NCI-funded study were published September 29 in Science.

More studies are needed to confirm the extent to which these effects of D-2HG are seen in people whose tumors have mutations in IDH genes, said the study’s senior investigator, Marcia Haigis, Ph.D., a professor of cell biology at Harvard Medical School. Further research can also help determine if blocking the activity of D-2HG might be a new way of treating these cancers, Dr. Haigis continued.

As for this current study, she said, the results bring into focus a more universal idea about cancer cell metabolism and the immune system.

“We know that in tumors there are thousands of metabolites,” she said. It’s quite likely that other metabolites in and around tumors “may impact T cells … and affect the immune system’s ability to control tumors.”

Metabolites in the tumor microenvironment

The IDH genes are responsible for producing enzymes that are critical to cells’ ability to produce energy. And although mutations in these genes are found in less than 4% of cancers, they are very common in some brain cancers, including one of the most deadly forms, glioblastoma. They’re also frequently seen in the aggressive blood cancer acute myeloid leukemia.

D-2HG was already considered to be an oncometabolite based on studies showing that cancer cells with IDH mutations produce an overabundance of it. Many of those studies have linked high D-2HG levels with what are known as epigenetic changes to DNA—that is, changes that alter how active genes are without modifying their underlying sequence—in a way that helps transform normal cells into cancer cells.

But not all researchers have been satisfied that this is the D-2HG’s only effect.

“I have never been particularly happy with that as the sole model” of IDH1-induced cancer, said Kristine Willis, Ph.D., of NCI’s Division of Cancer Biology.

In large part, Dr. Willis explained, that’s because many of those studies haven’t convincingly established the precise path by which D-2HG produces cancer-related changes in gene activity.

In launching their study, Dr. Haigis and her team looked to build on findings from earlier research. For example, some studies have shown that D-2HG accumulates at fairly high levels in and around tumors, in what is known as the tumor microenvironment.

And other studies have suggested that metabolites “can act as inhibitors of other types of cells,” she said. In fact, one other study suggested that D-2HG released by cells with IDH1 mutations can interfere with T cell’s cancer-killing abilities.

So the team wanted to investigate the possibility that D-2HG might be doing something to immune cells in particular that helps tumors with IDH mutations survive and grow.

Led by graduate student Giulia Notarangelo, the researchers focused on tracing D-2HG’s activity once it arrives in the tumor microenvironment.

To begin with, they found, the T cells primarily responsible for killing cancer cells readily took up D-2HG. Once inside the cell, D-2HG wreaked havoc.

For example, high levels of D-2HG in T cells that had been primed to attack tumor cells appeared to have a two-pronged effect: it thwarted their ability to release the molecules they use to kill abnormal cells and to signal to other immune cells for assistance.

But what does D-2HG do inside the T cells to upset their behavior in this way?

The answer, they reported, is that D-2HG appears to blocks an enzyme called LDH, which plays a pivotal part in T cell metabolism. That disruption, they concluded, starts a chain of events that neutralizes T cells.

In fact, the effects of treating the T cells with an experimental drug that blocks LDH were nearly identical to the effects of exposing the cells to large amounts of D-2HG.

Studies in mice appeared to confirm D-2HG’s impact on T cells. In mice with tumors that had IDH1 mutations, for instance, the researchers found high levels of D-2HG around the tumors. Moreover, the T cells that were in the microenvironment had many of the biological changes that they had seen in their studies of cells in lab dishes.

Finally, an analysis of tumor samples from people with glioblastoma that had IDH1 mutations offered some additional corroboration. In areas of the samples where D-2HG levels were high, for instance, there were fewer T cells. But there was no sign of D-2HG in samples from nearby healthy tissue.

And T cells that were found in these tumor samples also had signs of an impaired ability to release cell-killing molecules and signal to other immune cells.

In an editorial in Science that accompanied the study, James Nathan, Ph.D., of the University of Cambridge School of Clinical Medicine, wrote that its findings provide strong evidence that D-2HG can “rewire” a T cell’s metabolism.

But how it does so is likely not straightforward, Dr. Nathan continued. Different factors might affect the impact of that rewiring, or even whether it will occur at all, he explained. Those factors can include the availability of oxygen and other nutrients in and around tumors, which can dictate the processes that cells use to acquire energy. 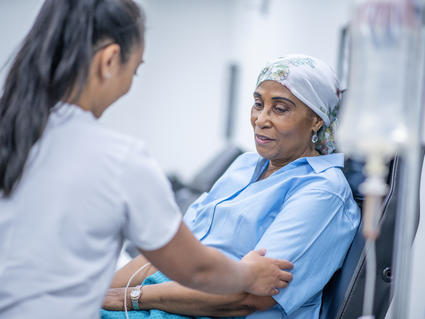 New Treatment Option for Some People with AML

Combining ivosidenib with chemo is effective for AML with an IDH1 gene mutation.

The study’s findings also don’t “rule out” that D-2HG also drives cancer-related activity in cells as a result of epigenetic changes, Dr. Willis said. But, overall, they “provide a new, and I think better, way to understand the effect of IDH mutations” in tumors.

More studies are needed to determine whether these findings open up new treatment possibilities for people whose cancers have IDH mutations, she continued.

Dr. Haigis said she’s hopeful that other research will build on her team’s work and see if therapies that block D-2HG might “be a new avenue for activating or reactivating … immune cells in the tumor microenvironment.”