Abnormal Collagen May Be Weak Spot for Pancreatic Cancer

A protein called collagen, which provides structure to tissues, is found almost everywhere in the human body, from the skin to the bones. Pancreatic cancer cells can also produce their own misshapen collagen, a new study has found.

And this abnormal collagen appears to have additional cancer-promoting functions. In experiments in mice, shutting down the production or effects of the abnormal collagen made treatments for pancreatic cancer more effective.

In the NCI-supported study, the research team found that the abnormal collagen ramped up activity in pancreatic cancer cells that increased tumor growth and survival.

But when the research team stopped cancer cells in mice from producing the abnormal collagen, everything changed. Perhaps most importantly, cancer-fighting immune cells started to move into the tumors. And when the researchers then treated the mice with a commonly used immunotherapy drug, their tumors shrank dramatically. The immunotherapy drugs were minimally effective in mice that had the abnormal collagen.

The study findings were published August 8 in Cancer Cell by Raghu Kalluri, M.D., Ph.D., of the University of Texas MD Anderson Cancer Center, and his colleagues.

This abnormal collagen makes a potentially promising therapeutic target, he explained, because it’s only produced by cancer cells.

“This is what everyone wants to find: an abnormal protein that’s specific to cancer cells,” said Grace Ault, Ph.D., of NCI’s Division of Cancer Biology, who was not part of the study.

Any potential strategies to target this abnormal collagen are years away from clinical testing, Dr. Ault warned. But these early results suggest that such an approach may hold promise.

Pancreatic cancer is notoriously resistant to commonly used treatments. Among other roadblocks, pancreatic tumors become packed with stromal (supportive) cells and the molecules they produce, including collagen. “Sometimes, the [cancer] cells are actually a minority of the cells in a pancreatic tumor,” explained Dr. Ault.

Normal tissues rely on collagen to perform many of their functions. A protein with a branched, fiber-like structure made up of chains called α1 and α2, it gives tissues both strength and flexibility.

“It’s the most abundant protein in the human body. It’s present in our bones, ligaments, and cartilage—it’s everywhere,” said Dr. Kalluri.

Collagen is normally produced by cells called fibroblasts. Past work from Dr. Kalluri and his team using mice found that the presence of normal collagen may actually help suppress pancreatic cancer growth.

But other research had suggested that pancreatic cancer cells can produce their own collagen. Whether this collagen is different—and whether it helps tumors survive and grow—wasn’t well understood.

When Dr. Kalluri and his colleagues reviewed a database that captures the molecular makeup of human cancer cell lines used for research, they noticed that the collagen produced by pancreatic cancer cells had a different structure. Rather than two α1 chains and one α2 chain, called a heterotrimer, it only contained α1 chains, producing an abnormal structure called a homotrimer.

This abnormal collagen didn’t appear to be the result of any gene changes (mutations) in the cancer cells. Instead, its production was driven by a difference in how the genes responsible for collagen production were expressed, through a process called methylation. This action, known as an epigenetic change, turned off the gene that normally produces the α2 chain.

When they looked at mice engineered to develop pancreatic tumors, they found that the abnormal collagen appeared to be promoting rather than suppressing tumor growth.

When the researchers engineered mice to develop pancreatic cancer that couldn’t produce the abnormal collagen, tumors grew more slowly, and the mice lived longer. Their tumors also had more of the tumor-suppressing collagen normally produced by fibroblasts.

How does the abnormal collagen promote tumor growth? Further work in pancreatic cancer cells isolated from mice found that the homotrimers were somehow boosting a communication pathway that can drive runaway cell growth. In contrast, normal collagen suppressed this pathway. 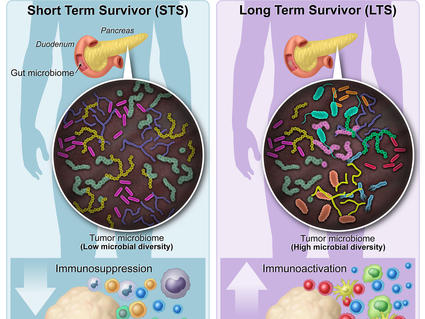 Study in mice tests altering microbiome as part of treatment.

When the research team looked for α3β1 integrin in tumor samples taken from 130 people with pancreatic cancer, they found that almost all expressed high amounts of the receptor.

Looping back to mice, several good things appeared to happen in pancreatic tumors engineered to lack the abnormal collagen. Among other things, it changed the microbiome of the tumor: the microorganisms and viruses that live in the tumor tissue.

The fact that tumors deep in the body can have resident microbes is a relatively recent discovery in cancer biology, explained Dr. Ault.

“It used to be thought that bacteria were mostly found in places [in the body] that were 'open,' like the mouth or the colon,” said Dr. Ault. “And people thought that inside, in contained tissues [like the pancreas] you didn't have all these bacteria. But it turns out they're all over.”

In tumors in mice that were engineered to lack the abnormal collagen, the populations of bacteria that lived in the tumors shifted compared with those found in nonengineered mice. These microbial changes were associated with the presence of more immune cells, such as T cells, in the tumor.

But the bacteria weren’t the only things linked to these immune cell changes in the tumors. Shutting down the aberrant collagen, they showed, also blocked signaling by the cancer cells that directly impeded immune cells, allowing T cells to flood into the now-friendlier tumor microenvironment.

“Making this homotrimer [may be] a very early event in a cancer cell's journey,” said Dr. Kalluri. “But more work needs to be done to connect the dots [as to how this happens],” he added.

Mutations in a cancer-causing gene called KRAS, which are present in almost all pancreatic tumors, may be causing the initial shutdown of normal α2 collagen chain production, he explained, but further study is needed to tease out if this is the case.

Regardless of the initial events that lead to a buildup of this abnormal collagen, Dr. Kalluri and his team are now looking at whether it could be a target for new cancer treatments in people.

One strategy they’re exploring is developing drugs that can shut down α3β1 integrin, which could potentially block abnormal growth signaling even in the presence of the collagen homotrimer.

Combining such a strategy with other treatments has potential, explained Dr. Ault. While blocking the activity of the abnormal collagen might not kill cancer cells, it could make them more sensitive to chemotherapy or immunotherapy, she explained.

The researchers would also like to engineer CAR T cells that can bind to the abnormal collagen. Since this collagen is only found in and around cancer cells, “that could direct [such T cells] to go to the cancer cells, not anywhere else,” Dr. Kalluri explained.

“We'd also like to understand if this [collagen] is unique to pancreatic cancer, or if it’s found in other cancers as well,” he added. Early results from his lab suggest that the homotrimer might also be found in lung, colon, and head and neck cancer cells, he explained, expanding the potential pool of cancer types that might be targeted with such an approach.

“But to understand how widespread this [collagen] is, we still need to do more work,” he said.