In a clinical trial of nearly 1,200 children with high-risk neuroblastoma, researchers have confirmed that the immunotherapy drug dinutuximab (Unituxin) can help children live longer.

Five years after being treated with dinutuximab, given along with two immune-boosting compounds and isotretinoin, 72% of children in the study were still alive and 61% had no evidence that their cancer had come back or their tumors had grown.

The study results were published July 15 in the Journal of Clinical Oncology.

The findings come from an extension of a clinical trial that initially compared isotretinoin alone with isotretinoin in combination with dinutuximab and the two immune-boosting compounds.

The initial trial showed that the dinutuximab combination substantially increased the number of patients who had no evidence of their disease coming back at 2 years and improved how long patients lived (overall survival). In 2015, the Food and Drug Administration approved dinutuximab to treat children with high-risk neuroblastoma.

Once the survival benefit of dinutuximab became evident, although children continued to be enrolled in the study, all new participants were treated with dinutuximab.

“The survival outcomes of these participants confirm the efficacy of dinutuximab shown in the initial study,” said Alice Yu, M.D., Ph.D., of the University of California, San Diego, who led the study, which was carried out by the NCI-sponsored Children’s Oncology Group.

Nita Seibel, M.D., head of Pediatric Solid Tumor Therapeutics in NCI’s Cancer Therapy and Evaluation Program, said the longer-term data in such a large number of patients provide important confirmation of dinutuximab’s effectiveness. However, Dr. Seibel said she’s particularly excited about ongoing and planned studies that are building on this initial success with dinutuximab by maximizing the drug’s potential.

“I’m hopeful that we can make further improvements in the treatment of children with high-risk neuroblastoma,” she said.

Ami V. Desai, M.D., a pediatric oncologist at the University of Chicago and part of the research team, agreed. “Dinutuximab has transformed the way we treat patients with neuroblastoma,” Dr. Desai said. “How can we further enhance the efficacy of dinutuximab, and how can it be used in different parts of therapy?”

Getting a better understanding of dinutuximab’s impact

Neuroblastoma is a childhood cancer of immature nerve cells. It’s rare, with only 800 children diagnosed each year in the United States, mainly infants and those under 5 years old. The disease is called high-risk when it has certain features that indicate it is aggressive, such as if it has spread from its original location. Approximately half the children diagnosed each year have high-risk disease.

In the original trial, which ended in 2009, more than 200 kids with high-risk neuroblastoma were randomly assigned to receive either isotretinoin or isotretinoin combined with dinutuximab and the immune system-boosting drugs IL-2 and GM-CSF.

Although new participants continued to be enrolled, the study’s randomization component was stopped in 2009 because of these encouraging results, and the researchers applied for FDA approval of dinutuximab. Continuing to enroll patients in the dinutuximab arm allowed the study team to further evaluate the treatment’s impact on survival and to better understand the side effects of dinutuximab in a much larger group of patients.

Keeping the study open and giving all patients dinutuximab as part of post-consolidation therapy also “gave patients access to the drug while it was still under consideration for approval,” Dr. Yu said.

Dr. Seibel pointed out that NCI “played a huge role” in manufacturing dinutuximab and making it available for the trial. Dr. Yu agreed. After the drug was approved, NCI transitioned the manufacturing operation to United Therapeutics, which went on to commercialize the drug.

Building on the initial success

The nonrandomized part of the study—the largest trial to date of children with high-risk neuroblastoma—included 1,183 children. Most patients completed all six cycles of therapy; five of the cycles included dinutuximab, which is given intravenously.

After 5 years, the majority were still alive and free of tumor growth or recurrence (also known as event-free survival), as were a subset of patients aged 18 months and older whose cancer was very advanced (stage 4).

The dinutuximab combination was associated with multiple severe side effects, with pain being among the most common. Some severe side effects, including allergic reactions, capillary leak syndrome, fever, and low blood pressure, were more frequent during treatment cycles that included IL-2.

Dr. Desai pointed out that since the nonrandomized study was conducted, IL-2—which is highly toxic—is no longer being used as part of post-consolidation therapy with dinutuximab. This shift came after a study conducted in Europe suggested that the addition of IL-2 added toxicity without improving outcomes and preliminary data from a subsequent trial showed similar results.

Despite having less rigid eligibility requirements for enrollment than the randomized study, the nonrandomized study showed similar survival rates and side effects, confirming the success of the initial study, Dr. Desai said.

Dr. Yu said that, despite the effectiveness of dinutuximab, the cancer still came back within 5 years in 40% of patients in the study. “What can we do to identify patients who are more likely to benefit [from the dinutuximab combination],” given the severe side effects associated with the treatment, she asked. 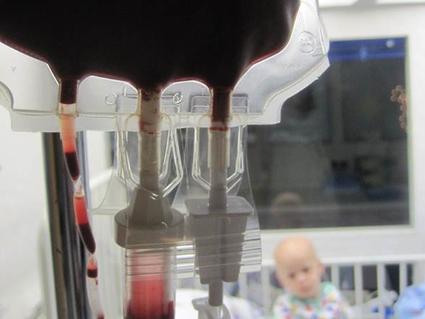 Treatments Continue to Evolve for Neuroblastoma

One area of intense research to address that question is to identify biomarkers. In the current study, the researchers found several biomarkers that show potential for identifying patients who might benefit most from the treatment. Work is ongoing to better understand the role of these and other biomarkers, Dr. Yu said.

Other studies are looking into whether dinutuximab can be given as part of induction therapy in combination with chemotherapy. A small pilot study has already been completed, and a phase 3 trial is being planned to test dinutuximab as part of induction therapy. If that study shows a survival benefit to using dinutuximab up front, the next steps might be to look at “whether we can do away with [stem-cell transplantation], because that [procedure is really hard on] patients,” Dr. Seibel said.