Being a teenager or young adult is hard enough. Add a cancer diagnosis, and the challenges—which can range from severe fatigue to financial stress—are likely to multiply.

In part, that’s because adolescents and young adults (AYAs)—typically defined as those between 15 and 39 years old—must deal with the hardships of cancer at the same time as they are going through major physical, social, and emotional changes. As a result, AYAs with cancer and survivors are likely to need different types of support than younger children or older adults, said Pamela Wolters, Ph.D., a psychologist in NCI’s Pediatric Oncology Branch.

An increased focus on the specific treatment needs of AYAs with cancer in recent years has improved survival rates for people in this age group, said Michael Roth, M.D., co-director of the AYA Program at the University of Texas MD Anderson Cancer Center. But, Dr. Roth continued, “we don’t have enough data on how cancer and cancer treatment impact an AYA’s life—not just during treatment, but also as patients go through life beyond treatment.”

Indeed, in a soon-to-be published analysis, Dr. Roth and Susan Parsons, M.D., medical director of the Reid R. Sacco Adolescent and Young Adult Cancer Program at Tufts Medical Center, found that only about 20% of phase 3 clinical trials conducted since 2007 that included AYAs with cancer captured information from patients about their quality of life during and after treatment.

And among the trials that collected this information, there was no consistency or standardization of questionnaires used to capture these data, making it hard to compare results across studies or diseases, Dr. Parsons said.

This shortage of data has consequences.

“We strongly believe that there are so many missed opportunities, not just to understand the AYA patient perspective, but also to determine how best to intervene to improve their lives,” Dr. Roth said.

He and Dr. Parsons co-chair a new task force that aims to address these gaps by gathering information directly from AYAs on how cancer and cancer treatments affect their quality of life—information known as patient-reported outcomes. A key goal of the task force is developing ways to standardize the collection of patient-reported outcomes from AYAs participating in clinical trials conducted through the NCI Community Oncology Research Program (NCORP) and NCI’s National Clinical Trials Network (NCTN).

The AYA Patient-Reported Outcomes Task Force, which is funded through NCI’s Childhood Cancer Data Initiative, was organized and launched last year by the Children’s Oncology Group (COG), an NCORP research base and one of five NCTN network groups.

One of the strengths of the task force, the co-chairs emphasized, is that it includes representatives from each of the NCTN network groups. By fostering collaboration across multiple clinical trial groups, the task force is expected to help greatly expand research in this area, said Alexis Bakos, Ph.D., M.P.H., a program director in NCI’s Division of Cancer Prevention.

And since cancer in AYAs is rare, standardizing data collection across NCORP and NCTN “will allow for more fruitful results” by providing data from many more AYAs using standardized measures, Dr. Bakos said.

About 89,000 AYAs are diagnosed with cancer each year in the United States, and the rate of new cases of cancer in this age group has been rising in recent decades. The number of US cancer survivors who were diagnosed as AYAs is estimated at more than 633,000 and is expected to grow substantially in the coming years.

A cancer diagnosis can greatly disrupt the lives of younger people, who are already going through so many changes and transitions, said Dr. Wolters. The resulting problems may include challenges in developing as an individual; issues with body image, relationships, and sexuality; and trouble finishing one’s education or getting started in a career. 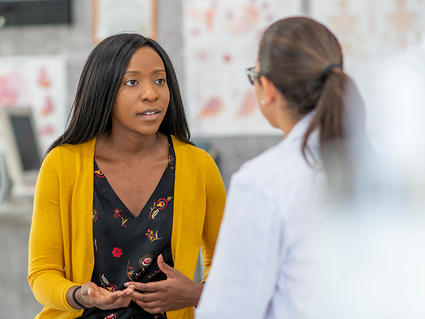 Risk of chronic health conditions is higher for AYA survivors than their healthy peers, study finds.

In addition, Dr. Wolters said, because some parts of people’s brains continue to develop well into their twenties, AYAs may be more likely to experience long-term cognitive effects of chemotherapy and radiation, such as problems with memory and attention, than older adults.

“Another important issue that may get overlooked is that AYAs who are transitioning from adolescence to adulthood may need to be more involved in managing their own medical care” than they’re used to, Dr. Wolters said.

To improve quality of life for AYAs during and beyond cancer treatment, “we need to make sure that we focus on the whole person and not just on one aspect of their care,” Dr. Roth said. “And we desperately need data … to be able to make a difference in their lives and to intervene on a larger scale.”

Dr. Roth also noted that, because the psychosocial health of AYAs is often not formally evaluated during and after treatment, intervening early with mental health resources and coping strategies may help improve an AYA’s quality of life.

Fostering Collaboration to Develop More Clinical Trials for All AYAs

One reason for the dearth of information on quality-of-life issues for AYAs is that, until recently, clinical trials focusing specifically on AYAs were few and far between. Depending on their age and the type of cancer they had, most AYAs with cancer enrolled in either a pediatric trial or an adult trial, Dr. Roth said.

As a result, those studies were less likely to gather quality-of-life information that was relevant to people in the AYA age group. In addition, Dr. Bakos said, “data collected on 20- to 30-year-old AYAs in adult clinical trials is combined with data on older adults, so you lose the nuance of how younger patients [in the trial] are doing.”

To help remedy this problem, the task force “has fostered collaboration with our adult [oncology] counterparts while also developing clinical trials—many of which are AYA specific—that span the entire age continuum for AYAs,” Dr. Parsons said. Many of these trials will specifically examine how AYA patients are doing during and following treatment.

So now, an AYA with cancer will have access to the same clinical trials, whether they go to a pediatric hospital or an adult hospital for treatment.

And, Dr. Bakos said, having information from these studies on how certain treatments affect AYAs will help in tailoring future treatments for this age group.

Today, Dr. Roth said, “We’re in the golden age of collaborative AYA clinical trials. And there are so many exciting concepts on the table to improve care for AYAs with cancer that now is the time to support those efforts with this patient-reported outcome research that will go on in parallel.”

For example, Dr. Roth pointed to studies testing new surgical approaches for AYAs with the bone cancer osteosarcoma that may reduce pain and enable a faster return to regular daily activities, and studies aimed at reducing often harsh side effects of treatments for AYAs with acute lymphoblastic leukemia.

Not a One-Size-Fits-All Approach

“A number of recent studies, including some performed by members of our task force, are giving us very compelling evidence about what quality-of-life domains are important to AYAs and which domains are important at different times during that very complex span of life,” Dr. Parsons said. “For example, the areas of sexual health, body image, and financial toxicity take on hugely different meaning for an adolescent versus a young adult.”

The group is also working to standardize the types of questionnaires, or surveys, that are used to assess these elements.

When possible, measuring a consistent set of patient-reported outcomes and using the same types of questionnaires across studies is important for comparing how different treatments that are being evaluated affect these outcomes, Dr. Wolters said.

Such consistency will also help researchers identify individuals or groups at highest risk for poor health-related quality of life, as well as opportunities to take preventive actions that improve how patients do and feel—in both the short and long terms.

However, Dr. Roth emphasized, “the task force is not developing a one-size-fits-all AYA patient-reported outcome inventory. It’s developing a flexible approach to incorporate and measure health-related quality of life in our clinical trials.”

This flexible approach will consider patients’ age and developmental stage as well as the symptoms and quality-of-life issues that are most important to patients receiving a particular type of cancer treatment. It will also encourage researchers to consider which quality-of-life elements they are most interested in capturing in their studies.

For example, a study of treatments for testicular cancer might focus on the impacts on body image and sexual function. By contrast, a study testing new treatment approaches for Hodgkin lymphoma might look at the effects of treatment on fatigue levels and patients’ ability to manage their own health and long-term follow-up care.

The task force’s work is addressing a critical and long-overlooked area of need, said Emily Tonorezos, M.D., M.P.H., director of NCI’s Office of Cancer Survivorship, which supports a number of studies on AYA survivors.

“AYAs with cancer face many unique challenges, both during treatment and long after,” Dr. Tonorezos said. “This effort will help us better understand and address those challenges and do it in a way that is better tailored to each individual.”

Meeting Patients Where They Are

To make collecting this quality-of-life data less burdensome, the task force wants to “meet the patients where they are and when they want to complete the surveys,” Dr. Roth said. So, rather than using the traditional method of filling out a paper questionnaire in the hospital or doctor’s office, patients would complete surveys on their mobile devices when convenient.

This is particularly relevant for AYAs, who are comfortable using smartphones and other electronic devices in all aspects of their lives, he noted.

To pilot test its recommendations, the task force is working with a few investigators who are developing new AYA clinical trials.

For example, Dr. Parsons said, a study comparing two different procedures to address the spread of bone cancer to the lungs will capture data electronically to assess the impact of each procedure on patients’ self-reported pain levels and functioning.

“Collecting these data helps to show patients that we’re listening to them and are interested in their input, and that will help to empower them and keep them more involved and invested in their own care,” Dr. Wolters said. That can only lead to better results in terms of how patients feel and their overall functioning, she continued.

“So, it’s a win-win situation all the way around.”