Immunotherapy before Surgery Appears Effective for Some with Melanoma

The treatment of melanoma has been transformed over the past decade, perhaps more than for any other cancer. And, based on the initial results from an NCI-funded clinical trial, another treatment enhancement for this often aggressive type of skin cancer is on the horizon. The approach appears to benefit people with advanced forms of the disease but whose cancer can still be treated with surgery.

Those few doses of pembrolizumab before surgery look to have paid off: there was a substantially lower risk of the cancer coming back among patients who received neoadjuvant treatment compared with those who only received adjuvant treatment.

And in about 20% of patients treated with pembrolizumab before surgery, their original tumor(s) disappeared entirely.

The results were presented September 11 at the European Society for Medical Oncology (ESMO) meeting in Paris.

The trial, which was conducted by the SWOG Cancer Research Network, hasn’t gone on long enough to determine whether neoadjuvant therapy with pembrolizumab improves how long patients live overall. But the results so far are very encouraging, said the trial’s lead investigator, Sapna Patel, M.D., of the University of Texas MD Anderson Cancer Center.

Based on the findings, Dr. Patel said she believes treatment guidelines from professional oncology organizations may be revised to recommend consideration of neoadjuvant pembrolizumab for people with this form of melanoma.

“Surgery still has a role” for these patients, she continued, but the timing of surgery may well change.

Other experts on treating melanoma agreed. During a session on the trial’s results at the ESMO meeting, Teresa Petrella, M.D., of the Sunnybrook Odette Cancer Centre in Toronto, said the study “supports the idea” that neoadjuvant therapy and adjuvant therapy is more effective than adjuvant therapy alone.

Leaving the tumor intact to kickstart the immune response

Adjuvant therapy has become a mainstay for treatment of many cancers, including melanoma. The premise behind adjuvant therapy is to kill any cancer cells not removed via surgery and those that are lurking elsewhere in the body but can’t be detected by any available methods. These cancer cells are often called micro-metastases.

For the trial presented at the ESMO meeting, called S1801, participants could have cancer that had spread to tissue near the original tumor (such as nearby lymph nodes) or even traveled to distant parts of the body. However, surgery was still considered to be an effective way to help treat their cancer.

For people who can still be treated with surgery, adjuvant therapy—either with immune-based treatments or a targeted therapy if their tumors have a specific genetic mutation—is now a standard practice.

In the S1801 trial, the researchers wanted to test whether starting immunotherapy before surgery could exploit the immune cells that are already present in and around patients’ tumors.

The immune cells are there because “the immune system has already recognized the tumor” as dangerous, explained Elad Sharon, M.D., of NCI’s Cancer Therapy Evaluation Program, who helped designed the study. The immune response just hasn’t been strong enough to destroy the tumor. 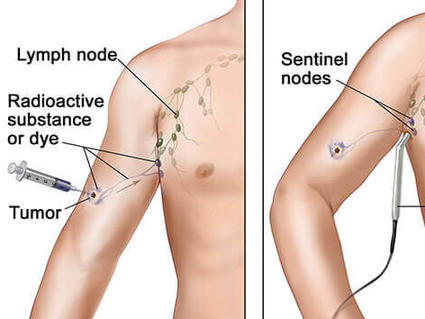 For some patients, a conservative approach may be best option.

Immunotherapy is intended to give this existing immune response a massive jolt, spawning a more lethal attack. “But when you [only] give it after surgery, when there's no measurable disease there, there's the legitimate risk that there isn't much left for the immune system to respond to,” he said.

With the tumor in place when those first doses of pembrolizumab are given, the drug can dramatically increase the number of T cells capable of recognizing and attacking the tumor, Dr. Patel said. “And after we remove that tumor, those T cells then migrate into the circulation, and now we have a higher number in circulation to go after [micro-metastases].”

A total of 313 patients were enrolled in the phase 2 trial. All had stage 3 or 4 melanoma.

The study’s primary measure was whether receiving the three pembrolizumab doses before surgery would improve how long people lived without experiencing specific events, known as event-free survival.

A potential concern with the neoadjuvant therapy approach is that if the cancer doesn’t respond to pembrolizumab and gets worse, there’s a risk that surgery may no longer be an option, Dr. Sharon noted.

And, indeed, that did happen: 42 people in the neoadjuvant group had some evidence of progression of their cancer during the neoadjuvant therapy period. However, in 30 of them, the progression was limited and they were still able to undergo surgery.

It’s unclear what to make of the small number of people in the neoadjuvant group who couldn’t undergo surgery, Dr. Patel cautioned. For at least some of them, there’s a strong likelihood that the progression was cancer that had spread far from the original tumor. Even if such people had had surgery right away, that would not have prevented the metastases, she continued.

In other words, at least some of these people may have been “spared surgery for what was a biologically aggressive cancer for which surgery would have done no good,” she said. The team is planning to do a “deep dive” into the data to get a better understanding of what happens to these participants, she added.

It’s unclear to what extent the trial’s finding will affect how people with stage 3 or 4 melanoma are treated, Dr. Patel said.

Treatment for melanoma has changed so rapidly that practice can vary from hospital to hospital. According to Dr. Sharon, because immunotherapy can have some significant short-term and potentially longer-term side effects, some centers rarely use adjuvant immunotherapy in people with these stages of melanoma.

Dr. Petrella suggested that the findings should have an immediate impact. The trial results, she said, provide support for “a new standard of treatment in this patient population.”

Dr. Patel said there are numerous questions still to be answered about neoadjuvant therapy.

For example, could a combination of two immunotherapy drugs be more effective, particularly for those whose cancer didn’t respond to just the single drug? And do patients whose tumors are completely eradicated with neoadjuvant therapy even need adjuvant therapy, or can they get less of it?

But, at least when it comes to neoadjuvant treatment with immunotherapy, Dr. Patel believes these new findings mark a shift in the treatment paradigm for melanoma, and potentially other cancers.

Although surgery immediately after diagnosis has been the standard practice, she said, “I think we’ve shown that leaving the cancer in place, at least for a short time, may be preferable.”