Drug Combination Shows Promise for Rhabdomyosarcoma, but Can It Get to Clinical Trials?

An NCI study in mice has identified a potential new treatment for children with rhabdomyosarcoma, a type of cancer that affects the muscles and other soft tissues.

The treatment—an experimental drug, ganitumab, in combination with the targeted drug trametinib (Mekinist)—stopped rhabdomyosarcoma tumors from growing and even shrank some tumors in the treated mice.

The findings were published November 2 in Clinical Cancer Research.

Based on these promising results, the researchers want to test this combination in humans in a phase 1 clinical trial. But the company that makes ganitumab discontinued the drug after it failed to work in a large study of people with Ewing Sarcoma, and any remaining supply of the drug has expired.

“This type of roadblock is frustrating,” said Marielle Yohe, M.D., Ph.D., of NCI’s Center for Cancer Research, who led the study. “We've identified this combination of drugs that would make a great clinical trial but, unfortunately, we find ourselves in a position where we don't have access to [ganitumab].”

Dr. Yohe and her co-investigators are now exploring options for obtaining a drug similar to ganitumab so they can continue their studies. Even so, the team’s experience is all too common in childhood cancer research, said Douglas Hawkins, M.D., of Seattle Children’s Hospital and group chair of the NCI-funded Children’s Oncology Group.

“Every year, there are a couple of drugs that are put on the shelf that we would have been interested in continuing development of, but because the adult study failed, there's no path to move forward,” Dr. Hawkins said. “If you're a drug company, developing a drug for a pediatric indication may not make financial sense because pediatric cancers are so rare. And that's the harsh reality.”

Rhabdomyosarcoma accounts for about 3% of all childhood cancers. The disease is usually curable if it is treated before it has spread. But if the cancer returns after treatment or spreads to other areas of the body, it is extremely difficult to treat. However, targeted drugs, particularly in combination, may offer some hope of improving these outcomes, Dr. Yohe said.

In 2018, Dr. Yohe and her colleagues showed that the combination of trametinib and a drug called BMS-754807 slowed tumor growth in mouse models of rhabdomyosarcoma. Trametinib blocks the activity of a protein in cancer cells called MEK that fuels tumor growth, and BMS-754807 blocks IGF-1R, another protein involved in tumor growth. However, the combination caused severe side effects in the mice, including excessive weight loss.

Ganitumab is a monoclonal antibody that also blocks the activity of IGF-1R but, based on findings from a small clinical trial, may have fewer side effects. The researchers wondered whether combining trametinib with ganitumab would shrink tumors and cause fewer side effects than the trametinib–BMS-754807 combination. 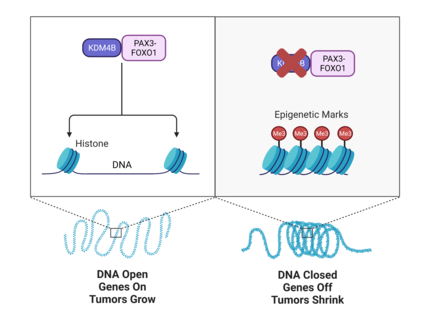 In mice, a drug that blocks the KDM4B enzyme eliminated tumors driven by a fusion protein.

In the new study, the researchers found that the combination of trametinib and ganitumab shrank tumors in several mouse models that closely resemble the most common type of rhabdomyosarcoma.

In several of the models they studied, mice given the combination treatment lived substantially longer than mice that did not receive the drugs or received just one of the drugs. Even after the researchers stopped treatment for a period of time, in some of the mice, the tumors didn’t grow back. The combination therapy also appeared to have few side effects.

Dr. Yohe said this is one of the first combinations of targeted therapies for advanced rhabdomyosarcoma that shrinks tumors in animal models. Drugs such as trametinib and ganitumab typically cause a delay in tumor growth, not tumor shrinkage.

During the study, however, ImmunityBio, the company that had been making ganitumab, stopped producing the drug. That move came on the heels of disappointing results with the drug in clinical trials of adult cancers, such as pancreatic and lung cancer.

Other studies of ganitumab have also been affected as a result. For example, an NCI-led phase 2 trial testing the combination of ganitumab and dasatinib (Sprycel) for rhabdomyosarcoma had to be stopped early when ganitumab became unavailable.

“Because of drug availability issues like this, it's been quite difficult to start new trials, and the direct patient consequence is that we're not moving the survival bar,” Dr. Yohe said. “In the last 20 or 30 years, we haven’t been able to improve survival in the advanced form of this disease.”

Dr. Hawkins pointed out that many other IGF-1R antibodies have also failed to show effectiveness in adult cancers.

Javed Khan, M.D., a co-investigator on the new study with Dr. Yohe, said that when they are planning a research study, they try to use drugs that have shown effectiveness in adult cancers in the hope of avoiding drug access issues like the one they are facing with ganitumab.

But, Dr. Khan added, it’s not possible to predict how drug development will play out. When they started their research, IGF-1R looked like it would be a good target for adult cancers, he said.

Drs. Yohe and Khan are not alone in their frustration.

“This problem is rampant, and it's happening all the time in different forms,” said Emily Slotkin, M.D., of Memorial Sloan Kettering Cancer Center, who has experienced a somewhat similar hurdle in her research for an effective treatment for desmoplastic small round cell tumor, a rare and aggressive type of sarcoma that is most common in young people. It involves a drug now called ACR-368. 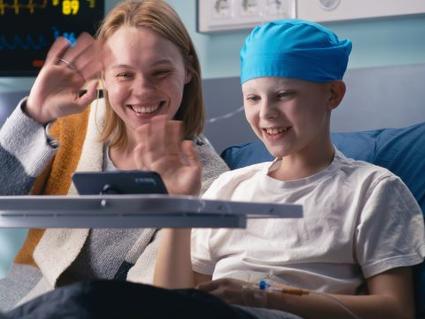 Dr. Doug Hawkins, chair of the Children’s Oncology Group, discusses efforts to improve the lives of kids with cancer.

In a small clinical trial led by Dr. Slotkin, the combination of ACR-368 and the chemotherapy drug irinotecan shrank tumors in some patients, and the researchers want to study the combination further. Although Eli Lilly initially developed ACR-368 (then known as prexasertib), the company discontinued the drug’s development in 2019. Acrivon Therapeutics later licensed the compound from Eli Lilly.

“With the licensing of ACR-368 by Acrivon Therapeutics, we are hopeful that we will still have the chance to gain access to this compound in the future,” Dr. Slotkin said.

“These types of barriers contribute to the sense of futility that researchers feel when they're trying to get their ideas to fruition,” she said. “The more barriers they face, the less enthusiastic they are to do the work that could potentially help a patient. It affects everybody's morale.”

To help incentivize drug development for childhood cancers, the Food and Drug Administration has a priority review voucher program that rewards companies for developing drugs to treat children with rare and life-threatening diseases.

But that may not be enough of an incentive for a company to take a chance on a drug that, even if effective, will be used by a relatively small number of patients, Dr. Hawkins said.

NCI has, in the past, stepped in temporarily to continue the development of a drug that did not have a commercial sponsor. Such was the case with the neuroblastoma treatment dinutuximab (Unituxin), which was initially manufactured by NCI until it found a company to take over continued development and manufacturing. Dr. Khan said he and Dr. Yohe are looking into this option.

But “it’s a steep uphill climb,” he continued, and this type of partnership happens rarely.
Another potential path forward is for researchers to partner with drug companies whose philosophy is to develop drugs for children, but these companies tend to be very small and have limited resources.

A more realistic option for researchers is to find other drugs to test. But that’s not ideal either.

“To restart work with another agent is expensive and inefficient, but is sometimes the other viable path forward,” Dr. Slotkin said. “However, the more you start over and over again, the slower you go.”

There’s also no guarantee that another drug won’t face the same access issue. “You want to have many irons in the fire, but there may not even be that many irons to pursue,” she said.

As for the rhabdomyosarcoma study, Dr. Khan said they are not ready to give up on ganitumab yet and are continuing to explore different options. “These are good results and could be a potential treatment for patients,” he said.

Dr. Slotkin is also staying hopeful. “At the moment, the way forward is patience and diligence,” she said. “We’ll keep chipping away at this until we can get the study done.”